With a valid ticket, ticket holders have access to all public transport in Berlin, including the S-Bahn, subway, buses, trams and ferries. The fare depends on the tariff zone and the ticket's period of validity.

Please note: Passengers have to wear an FFP2 mask on buses, S-Bahn and U-Bahn trains in Berlin. Failure to comply with the mask requirement will result in a fine. 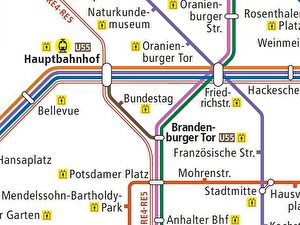 A single ticket (Einzelfahrschein) is valid for one person and a two hour journey through the city. It is a one-way ticket, meaning that round trips and return journeys are not included - for such purposes a new single-ticket must be purchased.

A short trip ticket (Kurzstrecke) is valid for three stops on the S-Bahn or subway, change of train being permitted, or six stops on buses and trams. A change of vehicle is not permitted.

Small children up to the age of five travel free of charge when accompanied. Children from 6 to 14 years travel with a reduced-fare ticket.

A 24-hour ticket allows one passenger to travel during 24 hours for as many trips as desired. Transportation fares for up to three children aged six to fourteen are included in the ticket price.

The small-group day ticket allows up to 5 people to use all public transportation services for 24 hours. One dog can also be taken along

For the months of June, July and August 2022, the BVG is temporarily offering a discounted ticket for €9 a month. The ticket is valid throughout Germany on public transport and on 2nd class regional trains. It is not valid for long-distance trains (ICE, IC, EC). The discounted monthly tickets are valid for the respective month and can be purchased in the BVG Fahrinfo app, the BVG Ticket app, or the Jelbi Mobility app.

The seven-day ticket allows one passenger to travel for a flat rate from time of validation for 7 consecutive days until midnight at the end of the 7th day.

Tickets for public transport can be purchased at the multilingual ticket machines located on the platforms of S-Bahn and subway stations. On buses, fares are paid to the bus driver, on trams at the ticket machines inside the trains. In larger stations, the S-Bahn and the BVG also provide ticket counters. Tickets can also be purchased via the free BVG app.

Before the journey starts, tickets must be validated by stamping them at the yellow or red boxes located on S-Bahn and subway platforms and inside buses or trams. In case of inspection, a ticket that is not stamped is not valid.

Anyone caught using public transportion without a valid ticket must pay a higher fare of 60 Euros. Even people who forgot to stamp their ticket must pay the fine. Be aware that ticket inspectors are dressed in plain clothes and will not make any exceptions for tourists. Those who get caught have to show a valid form of ID, otherwise the police will be called.

It is generally permitted to take your bicycle or dog with you on public transport in Berlin. However, some special rules and conditions apply and an additional ticket may be necessary. Find out more information: