There are more than 20 streetcar lines in Berlin, marked with the symbol "Tram". They mainly serve the eastern part of Berlin, where they supplement the subway route network. The Metrotram lines run more frequently than regular trams.

The tram and Metrotram lines in Berlin are maintained by the Berlin transportation company BVG and belong to the Transport Association Berlin-Brandenburg (VBB). Therefore, public transport tickets for buses, the S-Bahn or the subway are also valid for trams, and vice versa. Ticket machines are located inside the trams. Tickets can also be purchased at ticket machines on the platforms of the S-Bahn and subway stations or ticket counters in larger stations. 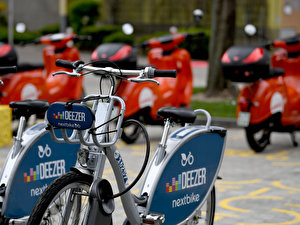 Electric scooters, bicycle and car sharing: Berlin has a number of modern transport options that will let you navigate the city with ease. more