The application period is closed and the 2021 Award winners were selected. Melanie Ort from Charité Berlin won the Early Career Scientist Award, and Dr. Alison Gray from Nottingham University won the Ongoing Project Award. You can watch their project presentations here: 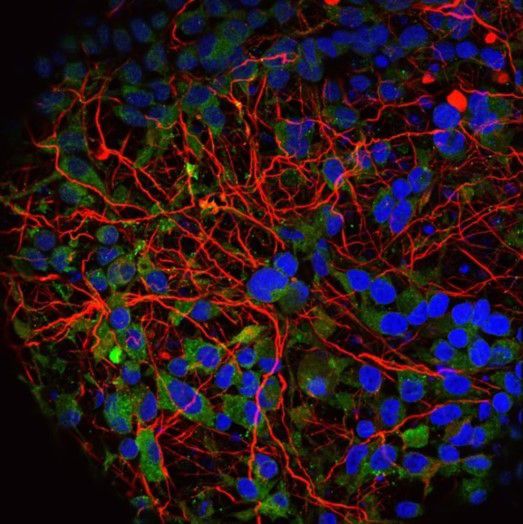 Two Awards of a total of 60.000 € for innovative, animal-free research methods

National and international scientists can apply!

For years, the public has been requesting that more is done to replace and reduce the use of animals in testing and research (e.g., FRAME, 2020), and thus the development of animal-free research methods must be supported to expand and accelerate their use. Nonetheless, in the current scientific paradigm animal experimentation is still considered to be the “gold standard” with which to investigate, understand and ultimately cure, human disease. However, there is mounting evidence that, not only from an ethical standpoint but also from a scientific one, a paradigm change away from the use of animals for biomedical research is inevitable and necessary (Herrmann and Jayne, 2019). The translational success rate from animal experiments to the human setting is extremely low (Ram, 2019), and the results of animal tests are often misleading, implying success that fails to be realized in humans (Kramer and Greek, 2018). One major reason for this is species differences between us and other animals (Pound and Ritskes-Hoitinga, 2018), something that William Russell and Rex Burch, the originators of the 3Rs (Replace, Reduce, Refine) Principles in 1959 recognized. Today, 62 years later, we are amid a new technological era that is offering undreamt-of opportunities for scientific experimentation (see e.g., Herrmann, Pistollato and Stephens, 2019). Although many of the animal-free, human biology-based New Approach Methods (NAMs) are still in their infancy, the use of human organoids, human organ-on-chip-technology, human induced pluripotent stem cells, as well as machine learning and artificial intelligence, is beginning to drastically change biomedical science for the better. If scientists continue to advance these human-biology based NAMs, and if funders provide sufficient resources, these innovative, human-relevant approaches have the potential to supersede animal experiments and become science’s new gold standard. This would not only prevent the suffering and death of countless millions of nonhuman animals but also expedite biomedical research and accomplish a paradigm change that would benefit humans and nonhuman animals alike.

The Animal Protection Commissioner of Berlin prioritizes the funding of two Awards for the development of NAMs to actively support the shift from tradition-based animal experimentation to human-relevant health research: The Early Career Scientist Award is for a promising research proposal from an up-and-coming scientist that will advance the development and uptake of NAMs; the second Award is for an already ongoing, auspicious project developing and/or using NAMs that needs additional funding for continuation. Each Award includes prize money of 30.000 €. The winners will be selected by an independent jury of international scientists with longstanding expertise in NAMs, based on predefined selection criteria.
The application deadline for the Early Career Scientist Award has been extended until November 1, 2021, 11.59 pm. The application documents must be submitted by email to tierschutzbeauftragte@senjustva.berlin.de or by post to Senatsverwaltung für Justiz, Verbraucherschutz und Antidiskriminierung, Stabsstelle der Landestierschutzbeauftragten, Salzburger Str. 21-25, 10825 Berlin (post-receipt). Please closely follow the Award Guidelines. The awardees will be informed by mid-November 2021. The Award Ceremony will take place during Berlin’s Animal Protection Day event on Saturday, November 27, 2021. Please block this day when applying for an award as the winners will be required to publicly present their project proposal (Early Career Scientist Award) or their ongoing project (Ongoing Project Award) during this event. Another prerequisite for these awards is that the winner is willing to present their project results in the 3Rs Training series of the Animal Protection Commissioner with the goal of ensuring a widespread knowledge transfer in Berlin’s research landscape and beyond.

FRAME (2020). Global study by FRAME revealed overwhelming majority of people (93.4%) think more needs to be done to replace and reduce the use of animals in testing and research. https://frame.org.uk/latest/research-confirms-public-desire-for-alternatives-to-using-animals-in-research/

Herrmann, K., Pistollato, F. and Stephens, M. L. (2019). Beyond the 3Rs: Expanding the use of human-relevant replacement methods in biomedical research. ALTEX-Alternatives to animal experimentation, 36(3), 343-352. https://www.altex.org/index.php/altex/article/view/1301

Pound, P. and Ritskes-Hoitinga, M. (2018). Is it possible to overcome issues of external validity in preclinical animal research? Why most animal models are bound to fail. Journal of Translational Medicine, 16(1), p.304. https://journals.plos.org/plosone/article?id=10.1371/journal.pone.0193758