Houses from the Wilhelminian period and industrial development determined the district of Rummelsburg for a long time. Today, the neighborhood features many new luxury residential buildings.

Rummelsburg is located between the tracks of the Ringbahn and Ostkreuz station in the northwest and Blockdammweg in the southeast. In the south, the district borders on the river Spree and Rummelsburg Bay. The main road Köpenicker Straße and the railway line to Frankfurt (Oder) run right through the middle of the. neighborhood

The neighborhood of Victoriastadt, also called Kaskelkiez, is a Wilhelminian style residential area in the northwest of Rummelsburg. It is completely enclosed by railway lines. A large part of the original residential buildings, some of which have adjacent sheds and small workshops in the backyards, have been preserved. After the German reunification, the entire area was almost completely renovated in accordance with the heritage protection laws. Most of the listed houses in the neighborhood have beautiful stucco facades. 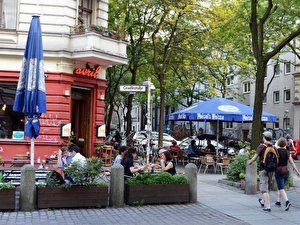 On the shores of Rummelsburg Lake, the neighborhood Wasserstadt Rummelsburg (Water City Rummelsburg) was built. Some of the old buildings of the former prison were included in the new hosuing estate. Rents here are high and some of the apartments have a doorman, which is very unusual in Berlin. Most of the apartments have a view of the water. There are also some terraced houses and studio houses. The rest of Rummelsburg Bay features owner-occupied housing estates and new multi-storey buildings as well as small 1920s and 1930s housing estates near the industrial areas north of the main road.

Further to the southeast, industrial development dominates. The Klingenberg electricity and heating power plant located here, next to the Spree. It was built in 1925/1926 and was long regarded as the largest and most modern power plant in Europe. Today, it still provides a large part of the energy supply for the city of Berlin. The extensive grounds of the Rummelsburg railway depot, where long-distance trains are serviced, are also located here.

The Weitlingkiez is a largely redeveloped Wilhelminian style (also called Gründerzeit style) old building area located on and around Weitlingstraße. The neighborhood is bordered by Lückstraße and Rummelsburger Straße as well as the city train and subway lines. Here, you will find quiet residential streets, numerous listed apartment blocks, schools, and a sports stadium. Some modernist architects realised their ideas of "new building" (Neues Bauen) here. The resulting functional residential complexes are almost all under monumental protection.

The housing estates on Kraetkestraße, Ribbecker Straße, Rummelsburger Straße, and Zachertstraße feature inner courtyards that have been turned into small green oases. At Marie-Curie-Allee/Delbrückstraße/Archenholdstraße/ ietzkestraße lies the Sonnenhof, a monumental-looking housing block whose facade faces south.

At the western border of the Weitlingkiez neighborhood lies Nöldnerplatz. The square features a school building from the 1930s designed by Max Taut. A playground and a skating track provide a certain recreational value. The Nöldnerplatz S-Bahn station, which connects the neighborhood with Ostkreuz and Berlin city center, is also located here.