Berlin is a city-state, and the Berlin Senate is Berlin’s state government. As the executive branch, the Senate is responsible for state policy and heads Berlin’s administration.

The Senators are responsible for different policy areas (Senate Departments), e.g., for finance, social services, education, or urban development. The members of the Senate meet to discuss political topics and draft legislation. Draft legislation must be referred to the House of Representatives (the legislative branch) so that its members can vote on it.

The government needs a majority in parliament to vote for government proposals. It is rarely the case that one political party holds the majority in parliament, and that is why the strongest party usually forms a coalition with at least one other party. At the beginning of a legislative period, the coalition partners come to an agreement on their shared goals. While negotiating this coalition agreement, the parties involved need to consider each other’s interests and make compromises.

As a result of Berlin’s two-tier administration, every borough is also a municipality.

Berlin’s borough mayors meet with the Governing Mayor at the Council of Mayors on a regular basis to discuss fundamental administrative and legislative matters. 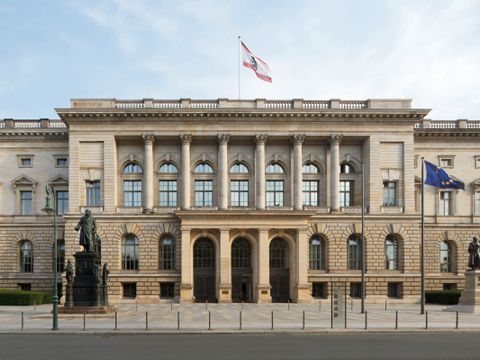 The Berlin House of Representatives

Since the last elections held on 26 September 2021, the House of Representatives has comprised 147 members. Political parties need to pass the five-percent threshold if they want to be represented in Berlin’s state parliament. A legislative period has a duration of five years. However, it can end earlier if a two-thirds majority of parliamentarians vote in favor of it or as the result of a referendum.

First vote
All voters have two votes. With the first vote, a candidate from one of Berlin’s 78 constituencies is elected to parliament. If a candidate gets sufficient votes, they win a direct mandate.

Borough assemblies (BVV)
All Germans and all EU (European Union) citizens who are registered in Berlin and are at least 16 years old are eligible to vote in the borough assembly elections. Borough assembly elections are based on proportional representation, and each voter can only cast one vote. It is not possible to vote for an individual; only parties or voters’ associations can be voted for. If a party or a voters’ association does not receive at least three percent of the votes, it will not be represented in the borough assembly.