The history of the Western powers in Berlin is full of suspense and drama. It begins with the American, British, and French occupying troops marching into Berlin in 1945 and ends with the Allies’ ceremonial withdrawal in 1994. 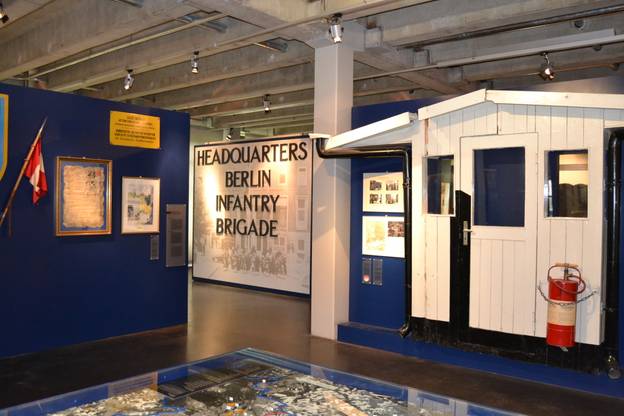 The first part of the permanent exhibition in the former American Outpost movie theater explores the years 1945 to 1950. The themes are the Allied victory at the end of World War II, the first years of the occupation, and the process of democratic renewal. The Berlin Airlift during the Soviet blockade of 1948/49 is a central focus.The open-air exhibition on the Museum grounds includes the British Hastings TG 503 Airlift plane, the dining car of a French military train, the last guardhouse from Checkpoint Charlie and segments of the Berlin Wall. These large-scale objects are impressive reminders of West Berlin’s status as an island in the middle of the Soviet zone of occupation, and stand for the threats to access routes to the western part of the city.
The second part of the permanent exhibition in the Nicholson Memorial Library examines the period 1951 to 1994. The focus is on the military confrontation between East and West during the Cold War. Berlin war an especially important scene of rivalries between opposing intelligence services. Apart from everyday life in the garrisons, the exhibition also highlights the events from German unity in 1990 to the withdrawal of the Western forces in 1994.
Nearly all of the texts in our permanent exhibition are trilingual in German, English, and French.