The memorial is named after one of the first victims of the Berlin Wall: Günter Litfin. It is located in a former command post of the GDR border troops.

The memorial is located on the Berlin-Spandau shipping canal. The preserved watchtower is one of 280 towers that stood along the Berlin Wall. Patrols were organised from the command post and the manning of further watchtowers was determined. Not far from the command post at Kieler Eck, Günter Litfin attempted to flee to West Berlin on 24 August 1961 and was shot dead.

Public guided tours take place every Saturday at 2 pm from April to October. During the one-hour guided tour, visitors receive penetrating background information on Günter Litfin and the successful efforts of his brother Jürgen Litfin to preserve the former leadership site as a memorial. The functioning of the GDR regime is made clear to participants using Litfin's example. 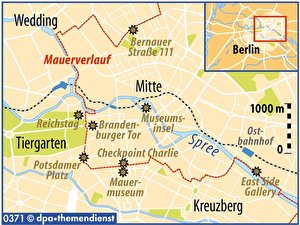