Most visitors to Berlin want to see the Wall. But of the concrete barrier that once divided the German capital, only remnants remain. Where to find pieces of the real thing - and which structures are only a replica.

Whoever comes to the capital wants to see it. But of the wall that once divided Berlin, only remnants remain. Where there is still a real wall - and what is only a replica.

A good starting point for the Wall Trail is the Berlin Wall Memorial on Bernauer Straße 111, where the consequences of its construction were particularly drastic. The Wall separated neighbours and families living only a few blocks apart. In the beginning, several East Berliners fled to the West through the buildings directly next to the Wall by jumping out of a window into the life net of the West Berlin fire brigade - until the windows were bricked up and the buildings later demolished. Today, the Documentation Centre at the Wall Memorial features a photo exhibition showing how the Brandenburg Gate was closed off with barbed wire in August 1961, how Berliners protested against the Wall, and how friends and family desperately extended their hands across the barriers.

Crosses in the Government District

The fact that the ininital border fortifications soon became much more than just a wall can be seen from the viewing platform over the outside area of the Wall Memorial. Here, you can see the foundations of the light poles with which the border was illuminated bright as day during the night, as well ad the posts of the signal fence, which triggered an alarm when touched.

The Wall Trail then takes you past the Reichstag. On Ebertstraße, at the corner of Scheidemannstraße, you can see a series of white crosses that commemorate the many people who lost their lives at the Wall. Up until today, burning candles and flowers adorn the crosses to remind visitors of the victims of an oppressive regime.

Wall Piece on the Grounds of the "Topography of Terror"

A lesser-known fact is that not far from Potsdamer Platz, on the grounds of the "Topography of Terror" documentation centre on Niederkirchnerstraße, a 200-metre-long original piece of the Berlin Wall still stands. Until 1989, it marked the border between the districts of Mitte (East Berlin) and Kreuzberg (West Berlin). The wall section shows all traces of destruction from the time of the fall of the Berlin Wall and is protected as a historical monument.
In Friedrichshain, on the other hand, the wall is painted with elaborate graffiti: Not far from the Ostbahnhof, the longest preserved section of the Wall, 1.3 kilometres long, stands along the Spree. It is called the East Side Gallery because the eastern side of the Wall was painted here by 118 artists from 21 countries. From February to September 1990 they were allowed to let their imagination run wild.
The motifs reflect the euphoria and atmosphere of departure of the time when the Wall came down and the Cold War was over. One picture shows barbed wire over which the sun rises, another the dove as a symbol of peace holding the chain of a prisoner. Some pictures have become world-famous - like the Trabi with the number plate "Nov. 9-89", which breaks through the wall. Many visitors let themselves be photographed in front of it, some let their backs lean casually against the wall. Parents place their children in front of the colorful background for the photo.

A popular destination for Wall tourists is Checkpoint Charlie in Kreuzberg, the former checkpoint from West to East Berlin. At the end of October 1961, Russian and American tanks faced each other directly here - the world was afraid of a new war for 16 hours. In front of the "Mauermuseum", founded in 1962, just 100 meters away, there is a small piece of original wall on display - as well as an original border post. The white house of the checkpoint on the western side is just a replica. In front of it, young men in US or Russian uniforms wave flags and offer to be photographed with visitors for money. 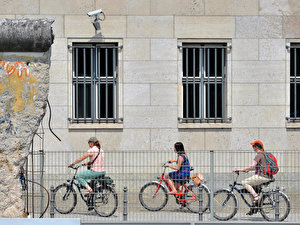