While the district used to have a peripheral location when Berlin was divided by the Wall into East and West, it now lies right in the center of the capital. Both Kreuzberg residents and the district's many visitors like to spend their time in Görlitzer Park, Viktoriapark and on the banks of the Landwehrkanal. The district of Kreuzberg got its name from the 66-meter-high Kreuzberg mountain in Viktoriapark.

The district is particularly popular for its countless cafés. The Graefekiez and Bergmannkiez, especially Bergmannstraße, for example, offer a wide range of options to enjoy breakfast, lunch, or coffee and cake. The atmosphere here is a little less trendy than in Prenzlauer Berg or Friedrichshain, the districts that received the most attention after the German reunification.

The image of Kreuzberg is still characterized by older stereotypes but the district has changed a lot in many places. These days, Kreuzberg is widely known for the May 1st riots, but also for the peaceful celebration of May Day, the so-called "Myfest", where residents and visitors come together. The area around Bergmannstraße has become a tourist hotspot and some formerly modest residential areas are now as desirable as they are pricy.

Despite all the changes, Kreuzberg is still one of the most multicultural parts of Berlin. Its residents of over 180 nationalities live peacefully together, side by side. 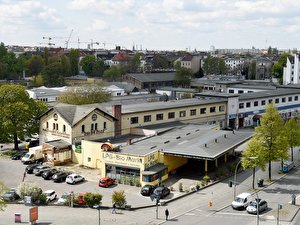 Kreuzberg used to be one of the most diverse parts of Berlin, but rents have risen considerably over the last decade. The district is very centrally located and features excellent connections to public transport. more 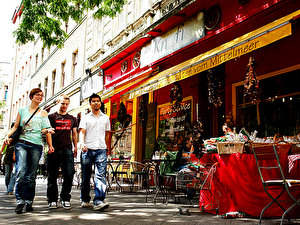 The neighborhood of Kreuzberg 61 is considered to be bourgeois, but it is also popular with artists and intellectuals. Bergmannstraße, Viktoriapark, and Graefekiez are located here. more 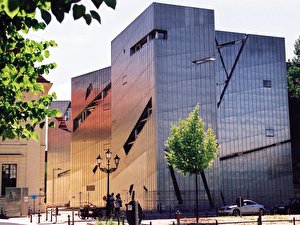 The northwest of Kreuzberg is best known for Checkpoint Charlie, the former newspaper district, and its many renowned museums. more 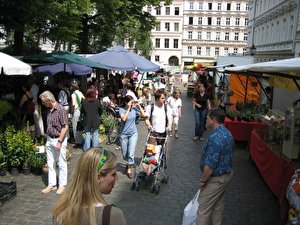