The East Side Gallery, one of Berlin's most popular sights, is a former section of the Berlin Wall. After the Fall of the Wall, artists have turned it into the largest open-air gallery in the world with over one hundred paintings.

The East Side Gallery is a 1.3 kilometre long painted stretch of the former Berlin Wall along Mühlenstraße in former East Berlin. It is the largest open-air gallery in the world with over one hundred original mural paintings. Galvanised by the extraordinary events which were changing the world, artists from all around the globe rushed to Berlin after the fall of the Wall, leaving a visual testimony of the joy and spirit of liberation which erupted at the time.

East Side Gallery is a monument to freedom of expression

Wall murals had previously been a highlight for visitors and a Berlin attraction for years but were only to be found on the western side of the Wall. The artists transformed the grey concrete rearticulating this into a lasting expression of freedom and reconciliation.

Some of the best known paintings such as "The Mortal Kiss" by Dmitri Vrubel, of Erich Honecker and Leonid Brezhnev's mouth-to-mouth embrace and Birgit Kinder's Trabi (Trabant) crashing through the Wall. They have provided popular postcard material until today. The paintings which still reflect the patchwork, eclectic and bohemian atmosphere of Berlin today are a mixed bag of surreal images, political statements and graffiti-like effusions stretching from the Oberbaum Bridge to Ostbahnhof train station. 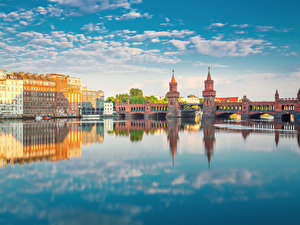 The East Side Tour focuses on the best-known sights along the river Spree in the eastern part of Berlin and includes some highlights in the government quarter as well. more

Restoration of the East Side Gallery

The East Side Gallery is a listed monument. Damaged by vandalism, pollution and weather conditions, the paintings were restored in 2009 by the same artists who originally created the works after the Fall of the Wall.