Due to the Corona pandemic, there is an obligation to wear masks in markets, particularly busy streets or shopping miles, shopping malls and queues where the minimum distance of 1.5 meters cannot be maintained. More informations »

The Memorial to the Murdered Jews of Europe is only briefly called Holocaust Memorial by most Berliners. Opened in May 2005, the memorial in Berlin-Mitte is located near the Brandenburg Gate and is one of the city's most impressive sights. The Holocaust Memorial consists of an undulating field of 2711 concrete steles, which can be passed through from all sides. While walking between the columns of different heights and the labyrinthine corridors, visitors may experience a brief moment of disorientation, which should open up space for discussion. Beneath the memorial is the Information Centre, which documents the crimes of the Nazi era in themed rooms.
Berlin's Holocaust Memorial, located in Mitte on a stretch of the former "death strip" where the Wall once stood near Brandenburg Gate, is Berlin's stunning monument to the Holocaust, dedicated to the Jewish victims of the Nazi genocide of World War II. Impressive in its awesome grey soberness, rather than sombreness, it includes an underground Ort der Information (Information Centre) located on the south-eastern side of the memorial grounds, accessible via two flights of stairs or a lift.

Information Centre at the Memorial

The 800 square meters Information Centre complements the abstraction of the memorial with personal documentation about individuals and families. This includes biographical details, recordings and information about memorial sites throughout Germany and Europe. Documenting the universal issue of genocide, the centre represents a central focus on the diverse memorial sites across Germany which stress the living memory aspect of remembrance. In Berlin an example of this is the Stolpersteine (tripping stones) initiative – plaques on street pavements, usually outside the house's main entrance, commemorating deported Jewish residents.

It took 17 years for the Memorial to be completed in Berlin. Its foundation stone was a Bundestag resolution passed on June 25, 1999 to erect a Memorial to the Murdered Jews of Europe. This was followed by years of discussion and deliberation, until the Monument was completed on May 8, 2005. US architect Peter Eisenman conceived the winning design consisting of 2711 rectangular blocks of concrete laid out in grid formation, recalling tombstones. The monument is open day and night and it is possible to walk through the concrete slabs at one's own pace. Visitors are not allowed to climb on them though, something which is particularly hard for younger visitors and small children to resist. The effect is that of inner dislocation in a destabilising maze as the ground is uneven and the blocks vary in height and size. An ideal setting for quiet contemplation. 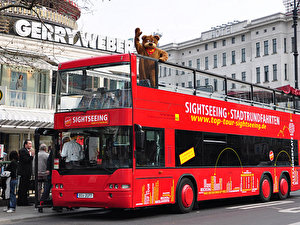 Get on the red sightseeing bus of the Hop-on Hop-off Tour at the Memorial to the Murdered Jews of Europe and discover the most famous sights of Berlin. more

Memorial to the Murdered Jews of Europe Information

Adresse
Cora-Berliner-Straße 1
10117 Berlin
City map
Phone
+49 (0)30 26 39 43 0
Opening hours
Field of steles: always accessible
Information Centre: Apr-Sept: Tue-Sun, 10-20; Oct-Mar: Tue-Sun, 10-19; Closing days Dec. 24 to 26, Dec. 31 from 16. The Information Centre is open on all the other holidays including Easter Monday, Pentecost Monday and May 1
Accessibility
Special passages for wheelchair users and people with walking disabilities are marked by the field of stelae. The information center can be reached by an elevator.
Admission Fee
free
Tours
free tours Sat at 15 (English); Sun at 15 (German) duration: 1.5 hours More offers available at the information centre
Website
www.stiftung-denkmal.de/en 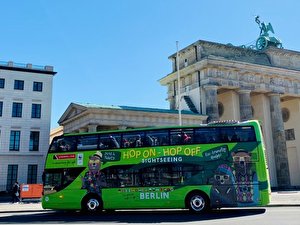