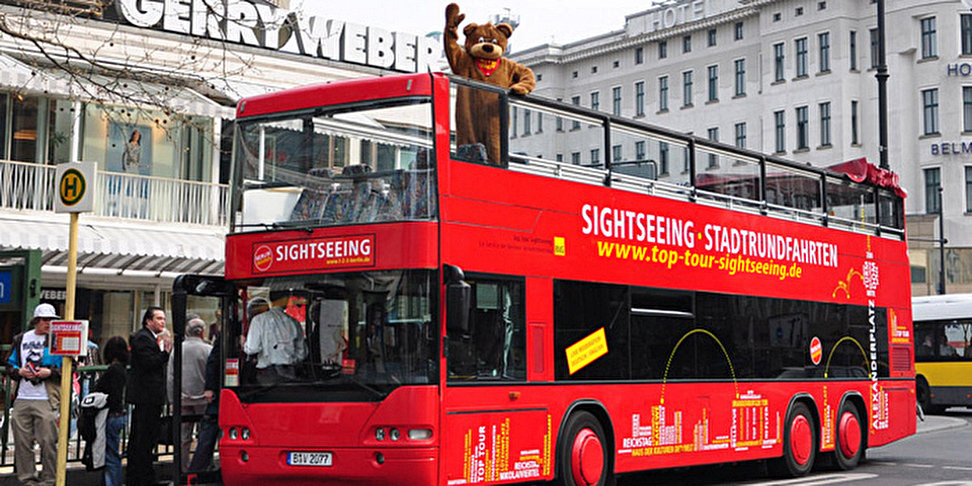 © TTS
Note: From 29 May 2020, city tours will be available again. During the Hop-on Hop-off tour by bus all current Corona regulations will be respected. Currently the tickets are not only valid for the red buses of the bus company Top Tours, but also for the buses of the bus companies BCT and BEX/BVB (yellow-red and pink-yellow buses). You can use all these buses with one ticket.

Hop On and Hop Off Tours are circular tours by bus of the most popular sights in Berlin's city centre. Simply hop on the bus at any station of the tour, hop off at a station of your choice and continue the city tour with the next bus on the course. See tour route here.

The buses travel about every 15 minutes daily between 9 and 6 from March to November (in winter only on Fridays, Saturdays and Sundays). The guided tours are available in German, English, Netherlandic, Swedish, Turkish, Hebrew, Polish, Danish, French, Chinese, Japanese, Russian, Portuguese, Spanish, and Irish.

Tickets are available for one day or for two days. The online ticket will be sent directly after booking via e-mail and can also be shown on the smartphone (a printout is not required). The ticket is valid for one or two full days of your choice within 12 months of booking. Stops of any length can be made at the stops of the route on the selected day(s).

There are 20 stops on the tour. The city tour includes the most important sights in Berlin:

City Tour by Bus Hop On Hop Off Tours on the map: