Whether in the 1920s, in times of a divided Berlin or today: the famous Alexanderplatz was and remains one of the liveliest places in Berlin.

The "Alex", as it is called by Berliners, is the cental square of the eastern city center and one of the most important sights of Berlin. The square and its attractions - such as the TV Tower, the World Clock, and the Fountain of Friendship between Nations - are popular with tourists from all around the world. In recent years, Alexanderplatz has also become one of the city's main addresses for shopping. The square and its immediate vicinity feature many stores of global fashion brands, the famous department store Galeria, and the Alexa, one of Berlin's largest shopping malls.
Alexanderplatz owes its current name to King Frederick William III, who renamed the square on the occasion of the visit of Tsar Alexander in 1805. Today's lively meeting place for Berliners and tourists was used as a military parade and drill ground until the middle of the 19th century. Merchants and farmers of the region also used the square to sell their goods.

The former parade ground has repeatedly been the scene for important historical events. During the March Revolution in 1848, the square was the location of heavy street fights. More peaceful fights for freedom took place here during the protests against the Socialist German regime in the fall of 1989, which culminated on Alexanderplatz on November 4, shortly before the fall of the Wall.

Alexanderplatz after the Second World War.

Like many places in Berlin, Alexanderplatz did not survive the Second World War unscathed. In April 1945, large-scale destruction occurred here in the course of hostilities. After the end of the war, Alexanderplatz was in located the Soviet occupation zone. Under Soviet control, the square in Berlin's eastern center took on its current form in the 1960s and 70s. In the spring of 1964, a competition to redesign Alexanderplatz was announced. The competition winner envisaged two important points for the square: freeing it from traffic and improving its quality of stay for pedestrians.

By 1969, all tram lines crossing Alexanderplatz were removed and the square's most distinctive buildings to this day were built: the former Centrum department store (now Galeria Kaufhof), the former Hotel Stadt Berlin (now Hotel Park Inn), the World Time Clock, and the Fountain of Friendship between Nations. The same year, after four years of construction, the TV Tower was inaugurated. Standing 365 meters tall, it is the tallest building in Germany. A ride up into the rotating observation platform will reward visitors with an unbeatable view of the city. Not far from Alexanderplatz you will find the famous Red City Hall and the Neptune Fountain. Since 1998, trams have been crossing Alexanderplatz again.

The Future of Alexanderplatz

These days, Alexanderplatz is in a permanent state of transformation. Its most famous buildings - the department store, hotel, Berolinahaus and train station - have long since been renovated. A large shopping mall, the Alexa, has opened its doors and modern skyscrapers are currently being built around it, giving Alexanderplatz a completely new skyline. 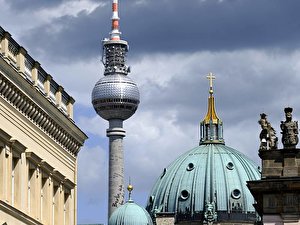 All of Berlin's Attractions and Sights