Located in the Mitte district near Alexanderplatz, the Red City Hall is one of Berlin's most famous landmarks and the seat of the Governing Mayor and the Berlin Senate.

The Red City Hall is the seat of both the Governing Mayor and the Senate of Berlin. The eye-catching building near Alexanderplatz is a well-known architectural gem of the city. It got its name not because of any political orientation but because of its facade, is made of bright red bricks.
The Red City Hall was built between 1861 and 1869 according to the designs of Hermann Waesemann. Just four years after the foundation was laid, the first magistrate's meeting was held here. The red color of the bricks used for the building's facade is particularly striking in the light of the evening sun. The tower, which is almost 74 meters high, can be seen from afar. The Red City Hall was built on a square ground plan and has four wings enclosing three open courtyards. After damage during World War II due to bombing, the building had to bewas reconstructed. When Berlin was divided, the East Berlin Magistrate met in the Red City Hall and the West Berlin Senate met in the Schöneberg City Hall. Since 1991, the Red City Hall has once again become the joint seat of government.

Rooms Worth Seeing inside the Red City Hall

The Red City Hall has over 247 rooms, among which several are worth a visit. The Wappensaal ("Hall of Emblems") was the original meeting place of the City Assembly. The name of the hall comes from the windows, which feature the are emblem of Berlin as well as the emblems of all Berlin districts. Today, mainly state guests are received here. The Great Ceremonial Hall was the meeting place of the East Berlin City Council until 1990. As the largest room in the city hall, it is now used for larger events such as receptions or ceremonies. The Hall of Columns inside the Red City Hall is particularly beautiful. The nine-meter-high hall originally housed the library. These days, it is used for exhibitions and events.

On the third floor of the town hall building are two halls bearing the names of two post-war politicians, Louise Schroeder and Ferdinand Friedensburg. These halls are currently mainly used for meetings but can also be rented. The portraits of all honorary citizens of Berlin are displayed in the hallways on the third floor.

The town hall building as well as exhibitions inside can be visited from Monday to Friday between 9 AM and 6 PM. However, due to daily operations as well as for security reasons, the building may be temporarily closed to visitors. It is recommended to ahead and inquire whether the Red City Hall is open for visitors. 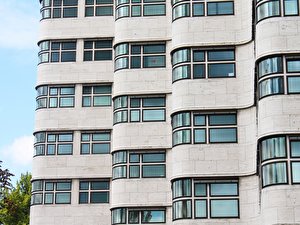