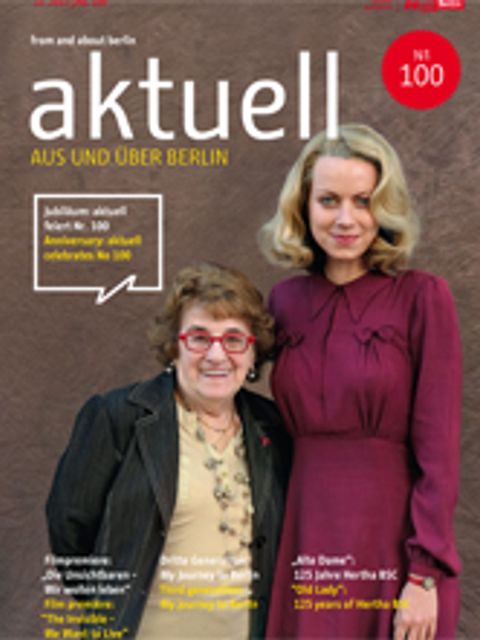 Published since 1970 by the Governing Mayor of Berlin, the magazine aktuell offers information from and about Berlin. The magazine gives former Berliners who were persecuted and driven into exile during the Nazi years the opportunity to stay current on events in their original hometown. aktuell sees itself as a bridge between the past and the future, as well as a forum in which contacts believed to be lost can be reactivated. It aims to remind readers of the Berlin of the past and to show them something of the Berlin of today and tomorrow. A print edition is published in June and December of each year and has also been available online since December 2003.

Because of the many letters we receive in response to each issue and the continuing interest in the magazine, aktuell was revamped for the 100th anniversary issue. Texts are now in German and English, and the magazine has a new look and a revised editorial concept. The changes accommodate the wishes of aktuell’s readers. We are happy to say that children and grandchildren of former Berliners – who don’t read or speak German – now want to stay in touch with our city through aktuell, too.

The founding of aktuell dates back to a 1969 Senate resolution that launched a program inviting Berliners forced to emigrate during the Nazi period to visit their former hometown (invitation program). The magazine has been produced by the Press and Information Office ever since, and is currently (as of January 2018) being sent to around 7,000 subscribers in 43 countries. The majority of its mostly very elderly readers live in Israel and the United States.

Our guest writers have included Federal President Horst Köhler, Bundestag Vice-President Wolfgang Thierse, and ambassadors from the United States, Israel, and the United Kingdom. Imre Kertész, a winner of the Nobel Prize for Literature, gave an interview. Each year, the December issue includes a calendar with Berlin motifs that is produced by the Jaron Verlag with the generous support of the Zwillenberg-Tietz Foundation.

If you are interested in aktuell, or if you have questions or comments, please contact the editorial office. The address, telephone number, and e-mail address can be found in the box on the upper right of this page.

For former Berliners who were forced to leave Berlin during the Nazi years.