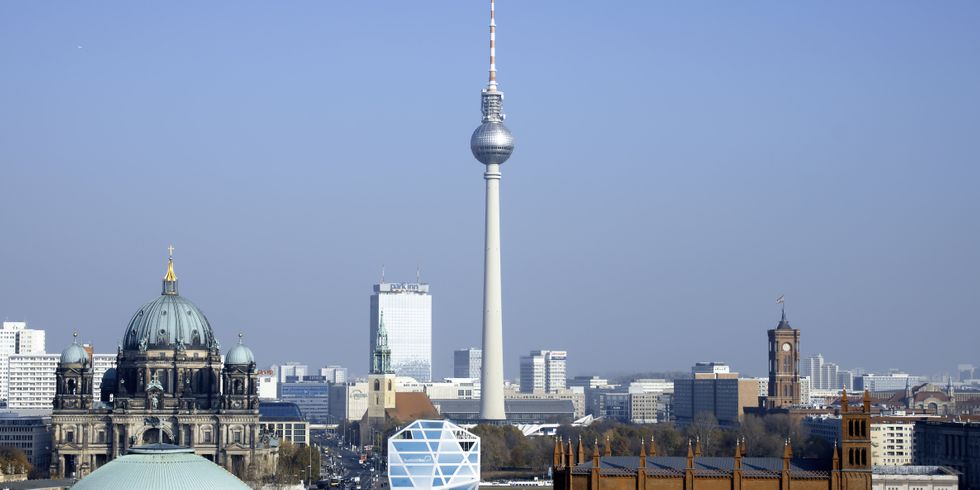 The main topics and current activities of the LADS include, amongst others:

Information and awareness raising are essential elements of a sustainable non-discrimination policy. Experts uniformly agree that there is an urgent need for well-directed measures that raise the public’s awareness of unjustified disadvantage and provide people with more information about their rights and options. Public relations and networking are, so to speak, ‘the nuts and bolts’ of any sustainable anti-discrimination policy.

Therefore one of the major tasks of the State Office is to raise awareness among the public as to their rights with regard to discrimination and to encourage people to defend themselves against discrimination.

For this reason, the LADS launches awareness raising campaigns, organises a variety of public events, distributes materials, delivers trainings and workshops within the LADS Academy, and participates in many informational and cooperative exchanges such as the European Cities Coallition against Racism (ECCAR) and the Rainbow Cities Network (RCN). 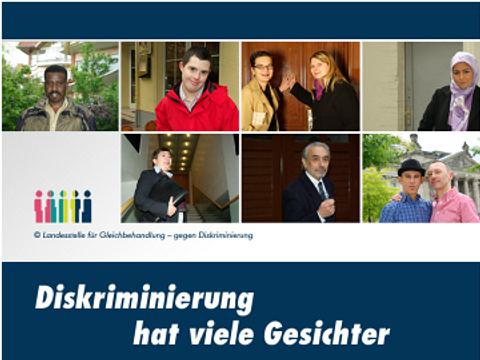 As an example the LADS runs since 2008 two alternating 30-second non-discrimination spots in the so called ‘Berlin Window,’ the television broadcast in the Berlin underground trains. The slogan Discrimination has many faces is used to introduce various forms of discrimination and to relate them to concrete experiences of social exclusion. The ‘Berlin Window’ reaches approximately 1.1 million passengers every weekday, which guarantees that the spots address a wide audience. The campaign has received a lot of positive feedback and will continue. 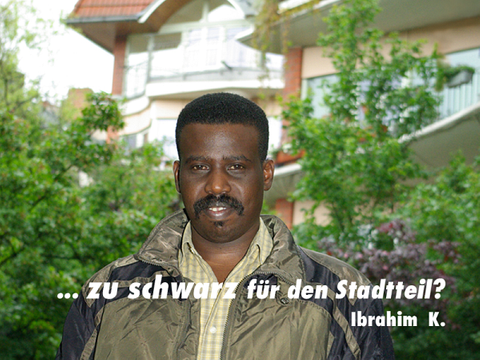 Campaing Image Racism in the neighbourhood

Pursuant to the International Convention on the Elimination of All Forms of Racial Discrimination adopted in 1966, this form of discrimination shall mean “any distinction, exclusion, restriction or preference […] which has the purpose or effect of nullifying or impairing the recognition, enjoyment or exercise, on an equal footing, of human rights and fundamental freedoms in the political, economic, social, cultural or any other field of public life”.

Racial discrimination is directed against the perceived colour of a person’s skin or his or her outer appearance; it may also be aimed at an (ascribed) ethnic origin, nationality, migratory background, language, religion or philosophy of life, as far as these are linked with exclusion and degradation, which is justified with an alleged inferiority by nature.

The Berlin Senate actively opposes racism and ethnic discrimination and pursues a large number of activities to fight racism, such as:

Due to the fact that right wing extremism, racism and anti-Semitism are a fundamental threat for the democratic culture and the cohesion of every society, the Berlin Senate has established Democracy. Diversity. Respect., a program for funding initiatives to prevent right wing extremism, racism and anti-Semitism. This program supports 40 projects annually, in order to strengthen democratic structures and civil society. Guiding projects are a specific counselling-team for victims of racist motivated violence, two mobile counselling teams to support community development and several projects of political education as extracurricular activities. 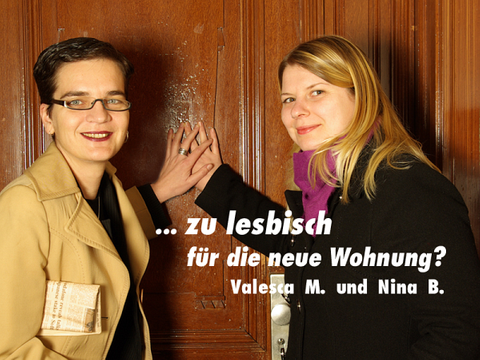 Sexual and gender diversity, homophobia and transphobia as well as discrimination due to sexual identity

Berlin promotes mainstreaming of people with different sexual identities and same-sex ways of life in accordance with Berlin’s Constitution and the General Equal Treatment Law. This mission is linked with a large number of fields of action which form the framework of the LGBTI Unit within the LADS.

Since its foundation in 1989, the LGBTI Unit’s task has been to promote the emancipation of lesbians, gays, bisexuals as well as of trans- and intersex people, to reduce discrimination in all spheres of life and to support society’s acceptance of different sexual identities and ways of life in a sustained manner. This also includes cooperation in the drafting of bills and regulations, bundling and providing information on relevant fields of issues, developing concepts and campaigns as well as informing, sensitising and advising the public and social institutions.The LGBTI Unit has been incorporated into the State Office for Equal Treatment and against Discrimination since February 2007.

Special attention has been given to the combat of homophobia and transphobia. The LADS has taken the overall responsibility for implementing the “Berlin supports self-determination and the acceptance of sexual diversity” initiative that was voted by the Berlin House of Representatives in April 2009. The present package of measures on implementing the following Senate resolution was developed in a steering round-table and five inter-departmental working groups.

The LGBTI Unit coordinates the large number of activities carried out by the individual Senate Departments and the stakeholders in civil society within the implementation of this action plan. Independent organisations are additionally funded as an essential part of empowerment and suppport to lesbians, gays, bisexuals as well as trans- and intersex people.It includes among others as well the strengthening of education and awareness-raising, the fight against discrimination, violence and prejudice-motivated criminality, the increase of the knowledge base to promote sexual diversity and the promotion of change in the administration by developing diversity guidelines.

At an international level, the LGBTI Unit is linked in the Informal Network of Governmental LGBT Focal Points and takes part in the roundtables twice a year which are organised in the participating European countries of the Network. Furthermore the Land of Berlin is founder memeber of the Rainbow Cities Network. 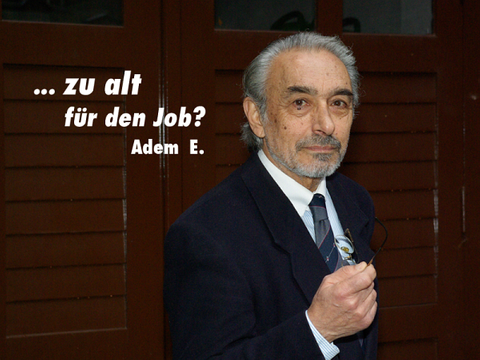 Ageism and discrimination due to age

The demographic change and the growing number of seniors represent particular challenges for our society. This development, however, is often discussed from a negative perspective. Expressions such as “flood of pensioners”, “age avalanche” and “excessive ageing” as well as prejudices which relate to age only with the need of care and a lack of active-mindedness are some examples for this development in the German context. Against the background of such age concepts, seniors are denied time and again specific benefits. This can be observed on the job market, in the health system but also in the finance and insurance businesses. There is no doubt that age discrimination is a very topical issue. “Age” in Germany is the characteristic with the most recent tradition of non-discrimination strategies, but the awareness of the problem of age discrimination has strongly increased over the past years, supported by the General Equal Treatment Law.

Fighting against age discrimination is an important focus in the non-discrmination policy of the Federal State of Berlin and is backed by a remarkable consensus which has found expression for instance in the unanimous vote of the Berlin House of Representatives on the review of age restrictions in Berlin’s regulations. 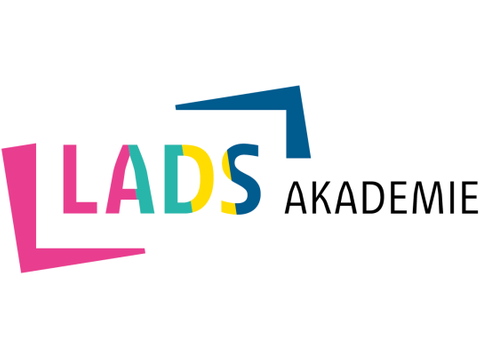 Behind the concept of Diversity are approaches which appreciate and intentionally support human diversity as a potential for society. Diversity encompasses both differences and similiarities. People differ in an amazing amount of aspects. Some of these real or supposed differences lead more often to discrimination than others do. In 2006, the General Equal Treatment Law entered into effect, aimed as a protection against racial discrimination and against discrimination due to ethnic origin, sex, religion or belief, disability, age or sexual identity.

The LADS carried out a project entitled “Berlin – City of Diversity. Implementation of efficient Strategies for Diversity by the Berlin Administration” from January 2010 to December 2011 with funds provided for the modernisation of the administration. The project was aimed at strengthening the competences of the administration in dealing with many different employees and citizens. For this purpose, the networking among administrative employees responsible for individual grounds of diversity was intensified, enabling them to benefit from each others’ experience. This way, double work is avoided and synergy effects are advanced.

Furthermore the LADS established the so called LADS Academy, that offers different kind of diversity sensitization trainings, each of them focusing on different grounds of discrimination. 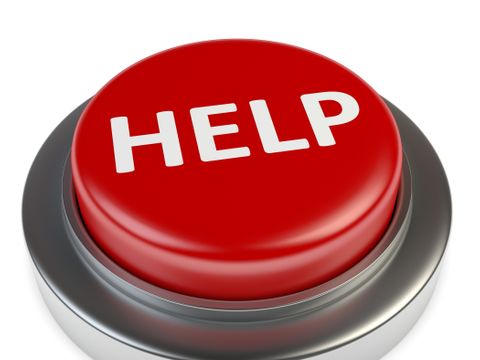 Strengthening the infrastructure for support and advice

In order to increase the quality of counselling, especially in its legal dimensions, the LADS co-operates therefore with the Chair of Public Law and Gender Studies at the Humboldt University to build a practical system for the exchange of relevant, up-to-date legal information, analysis and interpretation. This includes, inter alia, an overview of the AGG’s jurisdiction that can be found on the LADS website in German language.

Furthermore the LADS cooperates very closely with the National Equality Body and other supraregional institutions.

The Berlin State Office for Equal Treatment and Against Discrimination