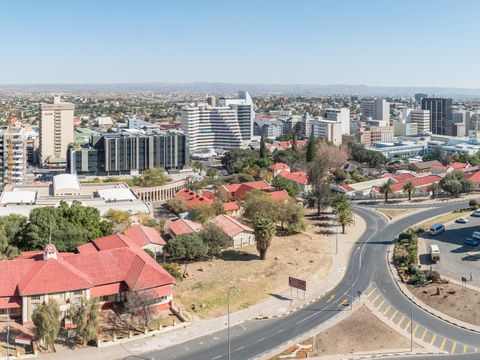 The joint declaration establishing a city partnership between Berlin and Windhoek was signed in Berlin on 6 July 2000. The partnership was formed against the backdrop of a shared history and close political and development policy ties between Germany and Namibia, and with an eye to what the German Bundestag has called Germany’s special responsibility towards Namibia. Berlin’s city partnership with Windhoek brought Africa into the network of city partnerships cultivated by Germany’s capital city.

Along with traditional cooperative models in administrative areas, which is done in this case with the Federal Ministry for Economic Cooperation and Development (BMZ) and concentrates on police work and urban development, exchanges focus mostly on education, training, environmental protection, sports, and culture.

An essential element of our city partnership is the dedication and commitment of many different NGOs, partly made up of volunteers, who support charity projects, organize cultural exchanges, and promote school partnerships, among other things. One example is the Georg-Friedrich-Händel Gymnasium, a high school whose youth orchestra maintains an active exchange with schools in Namibia. On a former farm in Namibia, Berlin’s Ombili Foundation is working to help the Khoisan people survive in the modern world. The aim is to preserve the centuries-old traditions of these indigenous people, who are threatened with extinction, in a changed environment. The project gets support for sanitation and medical concerns from the “Freundeskreis Gesundheit für Ombili Berlin- Brandenburg e.V.,” which holds a benefit event at the Berlin Town Hall each year.

As for environmental protection, a group of police officers from Berlin has been working for many years now to help protect rhinoceroses (RhinoCops), and the University of Namibia (UNAM) and Humboldt University in Berlin offer a shared course of study called “Biodiversity Management and Research.”

Three departments at HWR Berlin (Berlin School of Economics and Law) – Business and Economics, Public Administration, and Police and Security Management – are working with a partner university in Windhoek, Namibia University of Science & Technology (NUST). Starting on 5 November 2016, the third guest lecturer from NUST taught at HWR Berlin for four weeks. A joint postgraduate program makes it possible for students from Namibia to make a stay in Berlin.

In cooperation with the Deutsch-Namibische Gesellschaft and “Voices,” a group of choirs from Berlin, benefit concerts are held regularly to raise money to help AIDS orphans. The proceeds are used to support projects that ease these children’s difficult lives.

A large exhibition project was organized in 2017 at Künstlerhaus Bethanien and focused on Namibian pop music produced from 1950 to 1980. Various exhibition modules were created based on extensive research and in collaboration with veteran musicians like Baby Doeseb, Kakuja Kembale, and Jackson Wahengo, who are still around and were able to revive repertoires thought long gone. For example, the exhibition featured a “Pantheon of Namibian Music,” which honored the marginalized bands and singers with studio recordings and newly designed album covers. It also included historical photos of the bands and the legendary venues of this musical subculture.

In 2019, the photo exhibition “KUISEB Namibia – Fotographie von Xenia Ivanoff-Erb” was shown at the Ingeborg-Drewitz-Bibliothek and the exhibition “ZUSAMMEN WACHSEN – Kunst von Namibia” (“Growing Together – Art from Namibia”) at the Galerie im Kulturhaus Karlshorst.

Although COVID-19 put a stop to joint activities in 2020, new projects are already being planned for 2021.