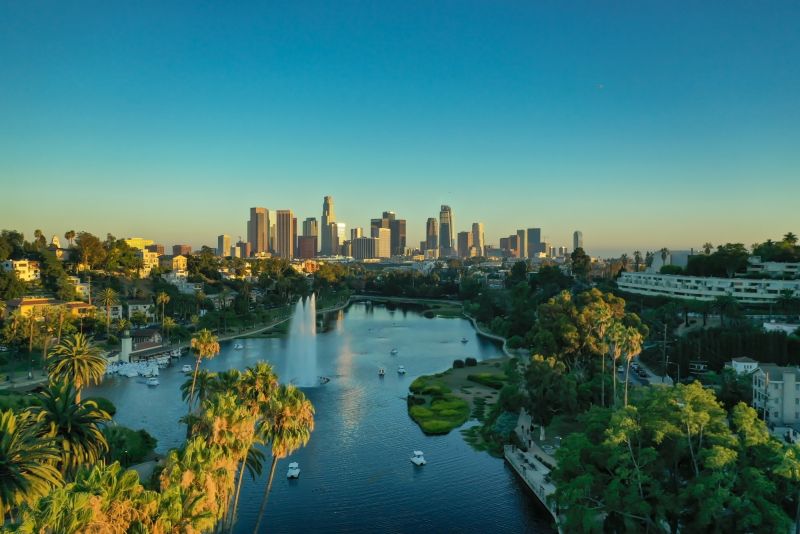 Originally launched by former Berliners who had emigrated to the U.S. and worked in the film industry, our partnership has led to a steady exchange, thanks to many individual activities, projects, and visits to both cities.
Culture and the arts have always been a priority, and countless exhibitions and guest performances by theaters or musicians have taken place over the years. Cooperative projects in film and television played a major role from the very beginning. Berlin’s Film Museum (Filmmuseum Berlin) has long-standing, close ties to Hollywood, and our sister city has strong ties to Medienboard Berlin-Brandenburg and Studio Babelsberg as well.

Another mainstay of our partnership is the exchange of experience in areas like urban development, architecture, public administration, judicial practice, and the work of police officers and firefighters, to name just a few. The zoos in Berlin and Los Angeles also work together and carry out staff exchanges.

Los-Angeles-Platz, a square near Berlin’s Kurfürstendamm, and the Berlin Forest in Los Angeles’s Griffith Park are both visible signs of the friendship between our two cities.

For years now, many universities and scientific institutes in both cities have engaged in close cooperation. In 2017, the senate chancellery initiated a Berlin fellowship for scientists from California working in the area of climate and environmental research (Berlin-California Visiting Fellows). With this fellowship program, which helps to fund research stays by climate scientists from California in Berlin, Berlin is making a concrete contribution to meeting the challenges of climate change in both cities and sending a strong message in support of academic freedom.

Economic ties between the two cities, exchange in the areas of climate action, environmental protection, and renewable energy, and cooperation in the startup sector and vocational education are growing in importance.
Cooperation partners in Berlin include the Senate Department for Education, Youth and Families, Berlin Partner for Business and Technology, visitBerlin, the business and technology park Adlershof, the Berliner Energieagentur, and Cleantech Business Park Berlin. The Los Angeles partners include the World Trade Center Association Los Angeles (WTCALA), the Los Angeles Cleantech Incubator (LACI), the Los Angeles Department of Water and Power (LADWP), and the Los Angeles Trade-Technical College (LATCC).

Countless projects related to Berlin take place in Los Angeles at Villa Aurora as well. Lion and Marta Feuchtwanger had made the house a meeting place for exiled German writers, while today’s Villa Aurora is a center for cultural and academic exchange between Europeans and Americans. Grant recipients from the arts – literature, film, fine arts, and music – use their work to share their California experience with audiences in Berlin. Since 2017, Berlin’s Senate Department for Culture and Europe has funded two three-month stays at Villa Aurora each year for visual artists from Berlin. Their stay gives these artists an opportunity to gain deeper understanding of and insight into American culture, study trends in the local art scene, exchange ideas, make contacts, and carry out an artistic project in Los Angeles. Musicboard and Medienboard Berlin-Brandenburg each provide support for an additional stipend.

A new institution, the Thomas Mann House, was added in June 2018. Its program likewise ensures strong connections to Berlin. In 2020 and 2021, the Senate Chancellery is also helping to fund the project “ALL THE LONELY PEOPLE.” This project involves an extensive program marking Villa Aurora’s 25th anniversary: an exhibition with a supporting program of concerts and readings at Silent Green in Berlin from 24 September to 10 October 2021; an exhibition at LAXART in L.A. from 20 November to 8 January 2022; and a symposium at the University of Southern California and Villa Aurora on 5 and 6 November 2021.

In 2017, Berlin and Los Angeles celebrated the 50th anniversary of their city partnership with many different events organized by various stakeholders and reciprocal visits by the two mayors. These encounters helped to reinforce and expand existing cooperation and to start new projects.
During the “Germany Year” in the U.S. that ran from 2018 to 2019, events organized by Berliners were held in Los Angeles, along with additional visits and cooperative projects in the area of probation services and renewable energy.

In-person events and projects have been on hold since the outbreak of the COVID-19 pandemic, but we have managed to maintain our exchange using videoconferences. For instance, the former head of the Senate Chancellery, Christian Gaebler, and the deputy mayor of Los Angeles, Nina Hachigian, spoke in December 2020 as part of the event series “[Virtual] Transatlantic Town Halls: German-American Mayors Forum” about the current challenges of the coronavirus pandemic and possible areas for cooperation in the future.