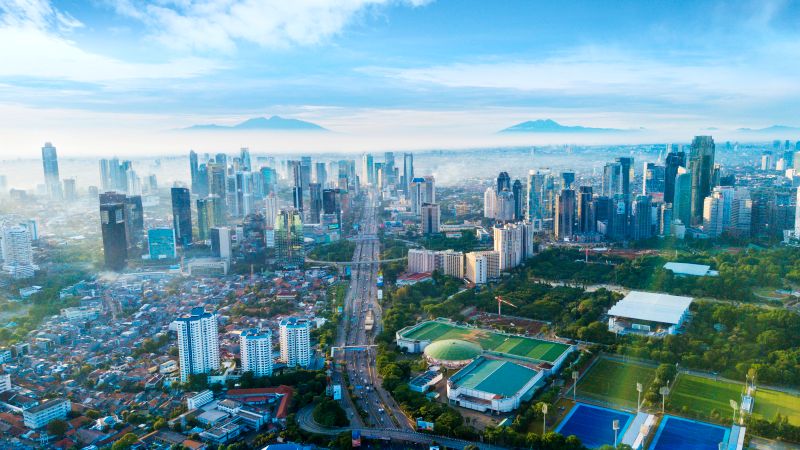 Berlin and the Indonesian capital Jakarta, a city of millions, have been city partners since 1994.

The two cities’ economic interests were the original priority of the partnership. With these interests in mind, then Governing Mayor Eberhard Diepgen traveled to Jakarta in 2001 with a delegation from Berlin’s business community. The Governor of Jakarta’s visit to Berlin for the 2009 Asia-Pacific Weeks renewed these original contacts and revitalized the exchange between the two cities; there has been active cooperation between Berlin and Jakarta ever since, especially when it comes to culture and sports.

In 2015, the Goethe-Institut organized the “German Season” in Indonesia, during which Berlin’s Retrofuturisten and the Indonesian puppet theater group Papermoon premiered their co-production “SENLIMA.” You can find out more on the website of the Retrofuturisten. In October 2016, the performance collective She She Pop performed in Jakarta at the Salihara International Performing Arts Festival.
Both cities are still very interested in business and financial policy questions. In 2017, two deputy governors from Jakarta visited Berlin; one came for the opening of the Balinese temple at the International Garden Exhibition and the other opened the Asia-Pacific Weeks as its guest of honor. In April and October 2018, delegations from Jakarta visited various institutions in Berlin for discussions about financial policy issues, among other things, while a Berlin delegation traveled to Jakarta for the Asia-Pacific Conference of German Business in November 2018. Jakarta is also an integral part of the StartUp AsiaBerlin initiative.

The city governments of Berlin and Jakarta are in close contact. Since 2017, the cities have taken part in the Asia conference of Engagement Global’s Service Agency “Communities in One World,” where they present specific examples of municipal development policy cooperation together. You can get an idea of the 2017 conference on the website of the Service Agency “Communities in One World” and see a short video about it at www.youtube.de. In connection with the Jakarta International Youth Program, two students from Berlin were invited by the city government to travel to Jakarta in the summer of 2017, where they engaged in an exchange with other international students on innovative and sustainable local government. Unfortunately, because of the coronavirus pandemic, the program planned for 2020 had to be cancelled. One great addition to our cooperation as city partners is the “integrated expert” that has been sent from Berlin to Jakarta by the German Federal Ministry for Economic Cooperation and Development, in cooperation with Berlin, since 2019. This expert works with Jakarta’s administration in the area of e-government.

The Berlin-Jakarta city partnership is sustained by a wide variety of stakeholders, such as associations, sports schools, journalists, and artists, as well as a strong Indonesian community. The diverse range of projects and events gives a special boost to exchange in the areas of culture and sports. In November 2018, three coaches from Berlin’s football association traveled to Jakarta to hold a seminar for youth football coaches there, giving hundreds of young people in Jakarta the chance to benefit from the training methods used in Berlin. However, this multiday seminar was not a one-way street. The Berlin coaches exchanged experiences with their colleagues in Jakarta and returned home with many new impressions of their own.

In 2019, Berlin and Jakarta celebrated the 25th anniversary of their city partnership with many individual projects on various themes that took place throughout the year, with Berlin helping to organize or providing financial support to these projects. In August 2019, a graffiti mural was painted in a pedestrian tunnel in the Indonesian capital in August 2019 to mark the anniversary of the Berlin-Jakarta city partnership.