The second largest shopping street in Berlin, located in the Steglitz district, is packed with shopping centres, specialised stores, cafés and restaurants. Department store at Schloßstraße in Berlin-Steglitz.

Due to the Corona pandemic, there is a requirement to wear mouth-nose protection in supermarkets and stores and on markets and in queues. More informations »

Schloßstraße is the most important shopping mile in Berlin's southwest, offering about 200,000 square meters of pure shopping pleasure. It stretches from Steglitz town hall in the south to Walther-Schreiber-Platz in the north and bursts with shopping malls, retailers, service providers, cafés and restaurants. There are boutiques, bag and shoes shops, beauty parlours, jewellery shops, electronics stores, sports outfitters, organic shops, and much more - whatever you need you will find it here.

One of Berlin's largest shopping centres, "Boulevard Berlin" was opened in 2012 and contains the historic façade of the old Wertheim store, which was demolished in 1952. The shopping mall also contains the Karstadt department store. With "Das Schloss", the "Forum Steglitz" and "Schloss-Straßen-Center" there are three more shopping malls in Schloßstraße. In the middle section of the street, the department store "Naturkaufhaus" offers products which were made according to ecological and fair trade standards.

Food and drink and culture at Schloßstraße

Schloßstraße has a long history as a shopping mile, but culture and entertainment also contribute to the street's character. A large multiplex cinema at its northern end is reminiscent of the historic Titania-Palast, which was a famous cinema before WWII. Schlosspark Theater was a major theatre were various German film stars performed after the war. Since 2009 the theatre has resumed productions. Countless restaurants, cafés and snack bars complete the shopping spree with delicacies ranging from burger chains and Asian restaurants to cosy Turkish snack bars.

Schloßstraße on the map 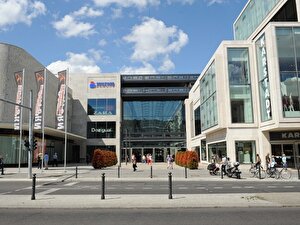 The shopping mall Boulevard Berlin opened in 2012 and provides a range of popular medium-priced level brands and chains. more 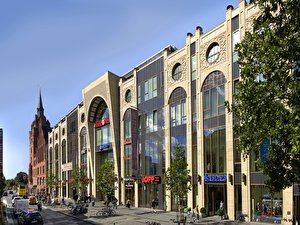 The shopping mall "Das Schloss" is situated in the south west of Berlin, right in the shopping area around Schlossstraße in Steglitz. more