The Kaiser Wilhelm Memorial Church on Breitscheidplatz is one of Berlin's most famous landmarks. The ruin of the old church has been converted into a war memorial.

The Kaiser Wilhelm Memorial Church is the symbolic center of West Berlin and one of the city's most popular sights. The original West Tower was partially destroyed during a bombing by the Allied Forces in 1943. Its striking ruin now rises into the sky as a memorial for peace between nations.
The Kaiser Wilhelm Memorial Church stands right in the middle of Breitscheidplatz in the western center of Berlin. The much-visited landmark is located in the immediate vicinity of many other Berlin attractions, such as the Berlin Zoo, Kurfürstendamm, and the KaDeWe department store. Even from a distance, the ruined spire of the church is eye-catching. Although it was restored several times after its destruction during World War II, it was intentionally not completely rebuilt. Rather, its ruin serve as a memorial against war and destruction.

The construction of the Kaiser Wilhelm Church was ordered by Emperor Wilhelm II, who wanted to create a religious memorial in honor of his grandfather, Emperor Wilhelm I. The neo-Romanesque church was built according to the designs of Franz Schwechten, who designed a building in the Romantic style with numerous towers. Its main the tower was the highest in the city at around 113 meters. Constructuin lasted from 1891 until 1895. The church was consecrated on September 01, 1895. Its interior was lavishly decoration with many mosaics and murals.

In November 1943, the Kaiser Wilhelm Church was largely destroyed in a bombing raid. During the post-war years, the church's ruins became a symbol of Berlin rising from the ashes of the war. In March 1957, the architect Egon Eiermann won a competition with his design, which proposed the complete demolition of the ruin and envisaged a completely new building. However, the question of the ruin's future led to a serious public debate and ended with a compromise: the partially destroyed corpus of the church tower, about 68 meters high, was preserved as a war memorial. The tower ruin was joined by a four-part building ensemble including an octagonal nave, a hexagonal bell tower, a square chapel, and a foyer. After almost four years of construction, the rebuilt church was consecrated on December 17, 1961.

The ruins of the Kaiser Wilhelm Memorial Church have been extensively renovated so that rainwater no longer penetrates the old walls. Repairs and renovation work were also carried out on the clocks, which have since been illuminated by LED spotlights. The new church is used for church services and events, and there is a small museum inside the old part of the church.

Every year, a popular Christmas market takes place around the Kaiser Wilhelm Memorial Church. Visitors can take a stroll, eat festive dishes and shop at over 200 stalls while listening to Christmas music. In December 2016, the Christmas market in front of the Kaiser Wilhelm Memorial Church gained sad notoriety when an Islamist terrorist drove a tractor-trailer into market-goers. Eleven people died in the attack and another 55 were injured. Today, a golden crack in the ground in front of the church commemorates the victims of the terrorist attack.

Address
Breitscheidplatz
10789 Berlin
City map
Opening Hours
Church: daily from 10 AM till 6 PM
Commemorative hall: daily from noon till 5.30 PM
Guided Tours
Different public and private tours of the church are offered.
Please Note
Visits to the church are not possible during services, prayers and concerts.
Accessibility
The platform on which the Kaiser Wilhelm Memorial Church stands is accessible via a ramp. The ramp is located on the side facing Kurfürstendamm, between the new church and the Old Tower. There are accessible restrooms in the basement.
Admission Fee
free
Website
www.gedaechtniskirche-berlin.de 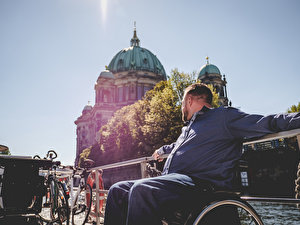