Gendarmenmarkt is arguably Berlin's most beautiful square and the site of three impressive buildings: the German Cathedral, the French Cathedral, and the Konzerthaus.

The Gendarmenmarkt square is best known for the building trio that frames it: the German the and French Cathedrals and the Konzerthaus (concert hall). Together, they form one of the most stunning architectural ensembles in Berlin. The eventful history of the Gendarmenmarkt can be traced back all the way to the 17th century. Each historical phase has left its architectural traces.
The Gendarmenmarkt was built at the end of the 17th century based on the plans of Johann Arnold Nering. At that time, French immigrants - mainly Huguenots - had settled in this neighborhood. The marketplace was originally called Esplanade, then Lindenmarkt, Friedrichstädtischer Markt, and Neuer Markt. Finally, in 1799, it was renamed Gendarmenmarkt. The name refers to the "Gens d'arms", a Prussian regiment consisting of French Huguenot soldiers whose guardhouse and stables were located here from 1736 to 1782.

Sights on and around Gendarmenmarkt

Anyone visiting Berlin's famous Gendarmenmarkt won't know where to look first. The twin buildings of the German Cathedral and the French Cathedral both emerged from relatively plain churches built on the market square around 1705. in order to make the Gendarmenmarkt even more attractive and, above all, more representative, two identical towers based on plans by Carl von Gontard were added next to the churches between 1780 and 1785. The designation "cathedral" may cause slight confusion here because it exclusively refers to the architectural form of the domed buildings, not to the churches themselves.

The centerpiece of the three-part ensemble on Gendarmenmarkt is the Konzerthaus, a concert hall built according to the plans of Karl Friedrich Schinkel between 1817 and 1821 on the foundation walls of the burned-down National Theater. The interior features sculptural decorations by Christian Rauch and Friedrich Tieck and a redesigned neo-baroque auditorium.

Gendarmenmarkt after the Second World War and Today

The Gendarmenmarkt was badly damaged during World War II, but was reconstructed over time. On the occasion of its 750th anniversary, the Schiller Monument by Reinhold Begas was returned to its original place after it had been removed by the Nazis in 1935. In 1950, the square was renamed "Platz der Akademie" but regained its old name a year after the fall of the Berlin Wall.

Today, the area around the Gendarmenmarkt is home to numerous shops, elegant cafés and restaurants, and luxury hotels. Popular annual events held on the square are the Christmas market and the Classic Open Air concert. 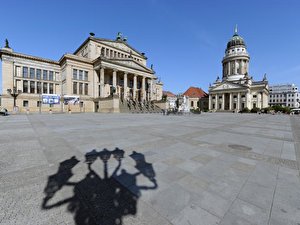 The French Cathedral is one of three major buildings at Gendarmenmarkt, along with the Konzerthaus and Deutscher Dom. It was erected as a place of worship for French Huguenots. more 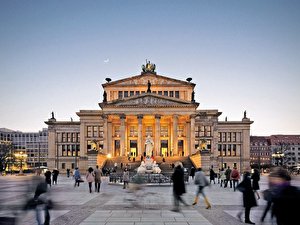 One of Schinkel's major buildings, the Konzerthaus at Gendarmenmarkt is a famous concert hall in Berlin and performance venue of the Konzerthausorchester Berlin. more