The straight north-south axis in the centre of Berlin experienced an incomparable rebirth after the fall of the Wall in 1989. Countless construction projects have resulted in the creation of a completely new shopping mile between Checkpoint Charlie and Friedrichstrasse station.

The centrepiece is the Friedrichstadt-Passagen with the French department store Galeries Lafayette (corner of Französische Straße), designed by Jean Nouvel, Quartier 206 with selected upscale boutiques by Henry N. Cobb and Quartier 205 by Oswald Mathias Ungers.

The Friedrichstraße was once as notorious as legendary as an entertainment mile. In the Admiralspalast and the Friedrichstadtpalast, located north of the train station, the tradition lives on with variety shows and glamorous revues.

The Berliner Ensemble on Schiffbauerdamm, once the workplace of the dramatist Bertolt Brecht (1898-1956), is one of the leading German theatres.

During the division of Berlin, the Bahnhof Friedrichstraße, opened in 1882, played a sad role. Today, an exhibition in the glass pavilion called the Tränenpalast (Palace of Tears) reminds us that the busy traffic junction between 1963 and 1990 was a border crossing between the GDR and West Berlin. 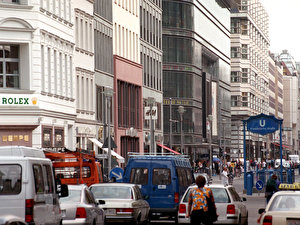 The Friedrichstrasse runs through Berlin as a north-south axis. Between Checkpoint Charlie and Friedrichstraße station a popular shopping mile has been created after the reunification of Germany more 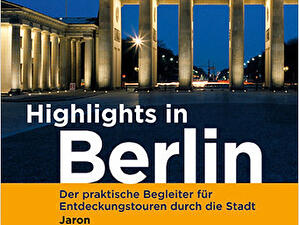 Text: Highlights in Berlin. The practical companion for discovery tours through the city 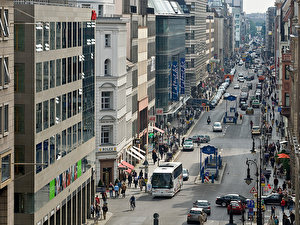 Friedrichstraße in the heart of Berlin is home to fashion stores for international luxury and high street brands, books, jewellery and upscale home decor. more

Source: Jaron Verlag | All texts, photographs and graphics on this site are protected by copyright. They may not be copied, reproduced, translated or used in any other way.