Friedrichstraße in the heart of Berlin is home to fashion stores for international luxury and high street brands, books, jewellery and upscale home decor. The 3.3 kilometre long Friedrichstraße is one of the most frequented shopping areas in Berlin. Named after Frederick William, Elector of Brandenburg, the street was a vibrant boulevard with expensive restaurants and hotels, high-end department stores and variety theatres even before World War II. Today, Friedrichstraße is home to many international, luxury and high street brands as well as flagship stores of fashion, design, cosmetics and jewellery companies.

A brief history of Friedrichstraße

Before World War II, Friedrichstraße was a notorious nightlife district for the wealthy. During the War it suffered severe damages and many of the adjacent buildings were completely destroyed. After having been separated during the Cold War by the Berlin Wall and the fall of the Wall in 1990, the street experienced an extraordinary rebirth. Investors filled the vacant lots with new buildings and mainly in the section south of the boulevard Unter den Linden whole new quarters were built.

Shopping at Friedrichstraße: A quick guide

Well-known buildings south of Unter den Linden are the "Friedrichstadtpassagen" located between Underground stations "Stadtmitte" and "Französische Strasse". The arcade is made up of three "Quartiere" with shops selling international designer clothing and home decor, French Department store Galeries Lafayette and a food hall.

Past Checkpoint Charlie, the Friedrichstraße slowly turns into a business area with many office buildings. The famous former border crossing marks the southern end of the commercial part of Friedrichstraße.

Food and entertainment at Friedrichstraße

The restaurants at Friedrichstraße and the adjacent side streets suit many palates: They serve Mediterranean to Asian, Italian and plain German cuisine and much more. At the restaurants Bocca di Bacco or the Grill Royal near the banks of the River Spree, Berliners, politicians, artists, journalists and hipsters meet to have a bite. One of the most renowned Berlin theatres, Berliner Ensemble, is located at Friedrichstraße as well. And so are Admiralspalast and Friedrichstadt-Palast, variety venues with a history dating back to the Golden Twenties in Berlin.

Friedrichstraße on the map

Address
Friedrichstraße 23
10117 Berlin
City map
Opening Hours
The shops at Friedrichstraße follow the rules for retail trading hours in Germany. Accordingly, stores are usually open from 10:00 - 20:00 though some may open or close at an earlier time. 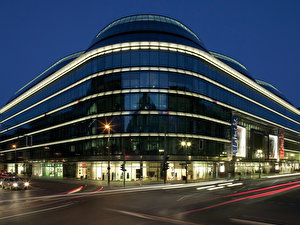 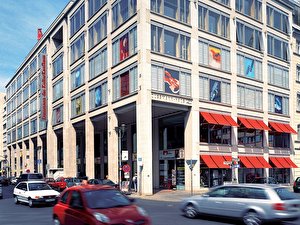 The uniqueness of Dussmann Culture Department Store stems from the fact that it only sells products related to culture like books, DVDs, CDs and notes. more