The public bus line 100 starts at Zoologischer Garten railway station and ends at Alexanderplatz. Although there is no commentary on the sights, the tour is a great and inexpensive way to take a city tour in a bus. All you need is a regular AB ticket and about 60 minutes of your time. The most important stops at a glance.

The bus 100 tour starts at the famous Bahnhof Zoo railway station, which became famous far beyond Berlin through the book "Wir Kinder vom Bahnhof Zoo" by Christiane F. Today the station is much quieter than it used to be because after the completion of Hauptbahnhof in 2006, Zoo station lost its status as a main-line station.

One of Berlin's most famous landmarks is visible from the tracks: the Kaiser Wilhelm Memorial Church. The neo-Romanesque church was built between 1891 and 1895 and largely destroyed during World War II in November 1943. The adjoining Breitscheidplatz is one of the busiest squares in Berlin with a striking fountain that extends down to the basement of the Europa Center.

The high-rising Waldorf Astoria Hotel overlooks the square, while the elongated "Bikini Berlin" on the side separates Breitscheidplatz from the enclosures of the Zoological Garden.

The magnificent Elefantentor (Elephant Gate) is an absolute eye-catcher and marks one of two entrance gates to the Berlin Zoological Garden. The original gate from 1899 was destroyed in the war and rebuilt in 1984 as a detailed replica. In the immediate vicinity is the Aquarium Berlin, which is the most species-rich aquarium in the world. In addition to fish, many amphibians, reptiles and insects can be observed here. 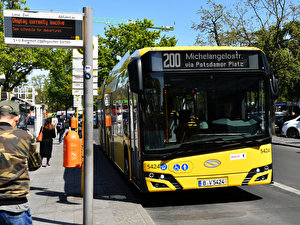 The public bus line 200 passes many of Berlin's most famous sights. Take an inexpensive city tour with the double-decker bus from the Berlin Zoo to Alexanderplatz. more

Stop 3: House of the World's Cultures

In Tiergarten lies another landmark of the city: the House of the World's Cultures (Congress Hall). Due to its unique shape, locals also call the building "Schwangere Auster" (pregnant oyster). Since its opening in 1957, many exhibitions and events have been held here every year. In the immediate vicinity is the Carillon, a bell tower with 68 bells.

A few minutes' walk from the Reichstag visitors can take a look at the most recognisable landmark of Berlin - Brandenburg Gate. The monumental gate looks back on 200 years of history. Since reunification, it has been the national symbol of unity. At night, the gate is illuminated with spotlights.

After a small detour, the 100 bus travels along what is probably Berlin's most famous boulevard: Unter den Linden. From the magnificent building of the Russian Embassy to the shopping mile Friedrichstraße, Berlin Cathedral and Lustgarten, there is one sight after the other. At the end of the central promenade stands the equestrian statue of King Frederick the Great. The 13.5 metre high monument was designed by Christian Daniel Rauch and is one of the most important equestrian monuments of the 19th century.

The impressive main building of the Humboldt University was built between 1748-66 as the third building of the Forum Fridericianum. It was not until 1810 that the newly founded university began teaching.

Bebelplatz is located directly opposite the main building of Humboldt-Universität. On 10 May 1933, the book burning initiated by the Nazis took place in the square. In the middle of the square the memorial "Sunken Library" by Micha Ullmann can be found. This underground room can be seen through a glass plate in the pavement.

On Bebelplatz there is another sight: St. Hedwig's Cathedral. The cathedral was the second building of the planned Forum Fridericianum. Today it is the seat of the archbishop of Berlin.

Right next to the Zeughaus, which today houses the German Historical Museum, is the rather small Neue Wache. It was built between 1816 and 1818 according to designs by Karl Friedrich Schinkel and has been the central memorial of the Federal Republic of Germany for the victims of war and tyranny since 1993.

The Zeughaus is one of the oldest and most beautiful buildings on Berlin's magnificent Unter den Linden. Construction began around 1695 under the direction of Johann A. Nering. The armoury was completed around 1706. After reconstruction and renovation, the permanent exhibition of the German Historical Museum has been on display in the Zeughaus since 2006.

The 100 bus crosses the Schlossbrücke designed by Karl Friedrich Schinkel. With its historic bridge railing and eight marble figures, it is one of the most impressive bridges in the city. To get of the bus here for some time is a worthwhile idea because the Lustgarten and Altes Musem are just nearby.

The Old Museum was built in 1830 according to the classicist designs of Karl Friedrich Schinkel. The 18 mighty columns in the vestibule and the granite bowl in front of the museum are striking.

Berlin Cathedral is a must for every church lover. During the Second World War, the cathedral was severely damaged by a bomb of combustible liquids which transformed the sermon church with the Hohenzollern crypt into a ruin. From December 2006 to 2008, a new cross was constructed for the dome as the predecessor was completely corroded by rust.

At the northwest corner of Schlossplatz, where the Palace of the Republic used to stand, there is another relic from GDR times - the Marx-Engels-Forum. Here the great fathers of scientific communism, Karl Marx and Friedrich Engels, are depicted as larger-than-life figures.

The Neptune Fountain is literally a stone's throw away from the Marx-Engels-Forum. The Neo-Baroque complex was inspired by famous fountains in Rome: the Fountain of the Four Rivers (Piazza Navona) and the Triton Fountain (Piazza Barberini).

St. Mary's Church dates from the 13th century, but has been altered several times due to fires. The wall painting of the Danse Macabre in the tower hall dating from the Middle Ages is one of the most famous and oldest monuments in Berlin.

The sightseeing tour with the 100 bus is coming to an end. Germany's tallest building - the Berlin TV Tower - is located directly on Alexanderplatz. At 368 metres, it is one of Berlin's most striking landmarks. When the weather is fine, tourists and locals stream into the TV Tower to dine in the sphere high above ground or simply to enjoy the view. 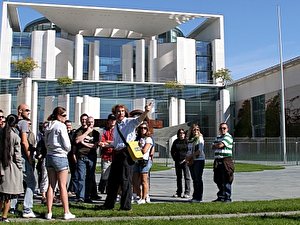