This year marks the 200th anniversary of Berlin as a trade fair location. On September 1, 1822, the first trade show opened its gates at Molkenmarkt in the Mitte district. The anniversary is to be celebrated under the motto "Messe Berlin - hosting the world for 200 years", as the Messe Berlin GmbH announced on Wednesday (February 2, 2022). Governing Mayor Franziska Giffey (SPD) will be patron of the festivities. For September, a ceremonial act is planned on the fairground at the radio tower. A series of guided tours with different focus topics is also in planning. Trade fairs contribute significantly to the international importance of Berlin as a business location, Giffey announced. "That's why it's good that Messe Berlin is not only looking back in its anniversary year, but also looking forward and repositioning itself."

Messe Berlin CEO Martin Ecknig said that the anniversary comes amidst a difficult phase. The restrictions caused by the Coronavirus pandemic are still clearly noticeable. In November 2021, the traditional agricultural and food fair Green Week, which had been planned for January 2022, was cancelled.

Mid-Decemer, the Messe GmbH announced that the tourism trade show ITB would not take place as a major event in March. Instead, the tourism industry would meet online. The Fruit Logistica trade fair has been postponed from February to early April. Messe GmbH is counting on the pandemic situation easing after the peak of the Omicron wave, which is expected in February, so that the international fair for trade visitors will be possible.

According to initial figures for the past fiscal year 2021, Messe GmbH's preliminary sales amounted to around 160 million euros, while the preliminary result was a minus of around 50 million. According to Messe, the economic development was thus better than initially expected due to the pandemic-related business slump. The company benefited from some completely new tasks: "The trade fair established seven vaccination centers and several vaccination offices in Berlin," said Ecknig. Without these revenues, sales would have been significantly worse.

"We are looking forward to 2022 with great confidence," the CEO of Messe GmbH declared. He added that the trade show calendar is well filled with around 70 events. "The demand in itself is a good signal." Ecknig hopes that the restart - as he put it - will succeed. The Fruit Logistica, which starts April 5 and for which 50,000 square meters of exhibition space are planned, is considered an important step. According to the organizers, some 2,000 exhibitors from 80 countries have confirmed their participation. "We can and may believe in the restart," Ecknig said.

The question of how many trade shows will really take place in 2022 remains open, as does the extent to which digital formats will replace parts of the traditional trade show business. Ecknig says there have always been changes in the 200 years of trade fair business in Berlin. "But the future has always needed a platform. That's exactly what we're doing here with Messe Berlin." The concept of trade fairs and congresses has proven to be successful, he says - people want to meet at the trade fair and not just on the screen. However, "business as usual" should not be the motto, Ecknig said. In the future, Messe Berlin would focus more on key topics of Berlin as a business location, such as fintech, creative industries, mobility, or the healthcare industry. Berlin's start-up sector will also gain in importance for the trade fair business, he added. Messe GmbH wants to network more closely with the start-up scene. 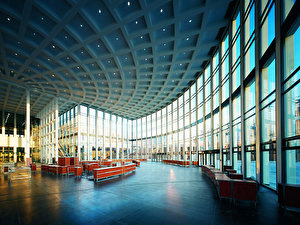 Berlin as a Trade Fair Location