No museum for the tender-hearted: The Disgusting Food Museum lives up to its name and presents a selection of the world's most disgusting edibles.

Surströmming, durian fruit, eyeballs, maggot cheese and more: the museum shows the limits of good taste. What at first glance seems like a culinary cabinet of horrors soon turns out to be an object lesson in how different tastes vary according to individual and cultural preferences.

However, the aim of the Disgusting Food Museum is not merely to disgust and shock its visitors. Rather, the permanent exhibition shows how the human feeling of disgust works and how it can be influenced. For example, it becomes clear that food based on animal cruelty practices can evoke our disgust. This applies to foie gras, for example.

In addition, the museum supports its visitors in overcoming the feeling of disgust. This usually arises immediately at the first sensory experience - be it the smell or the mere sight and is sometimes based on one's own cultural imprint. However, those who deal with the object of disgust can overcome this first impression and have new, defining experiences.

Tasting Bar for the brave

A tasting bar provides some of the food on display. The so-called "disgust food" includes insect bars or haggis. The samples are not meant to be eaten on the spot, but to be taken away. 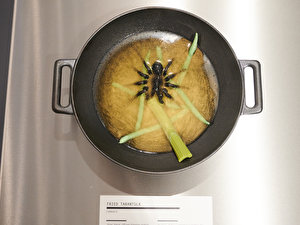