One of the most popular attractions in Berlin, the Pergamon Museum is world famous for its archaeological holdings. The Pergamon, located on Museum Island, is really three museums in one – the Collection of Classical Antiquities (also on display in the Old Museum), the Museum of the Ancient Near East, and the Museum of Islamic Art. The Pergamon Museum’s monumental highlights are truly breathtaking to behold. In the Collection of Classical Antiquities, the 2nd century BC Pergamon Altar, considered a Hellenistic masterpiece, has a frieze depicting a battle between the Gods and the Giants; the Market Gate of Miletus shows an important example of Roman architecture.
The Museum of the Ancient Near East, which ranks among the world’s best collections of treasures from this region, is dominated by the imposing bright blue glazed-brick Ishtar Gate of Babylon from 6th century BC. The gate is decorated with dragons, lions and bulls, symbolizing the major gods of Babylon; a transparent back wall lets visitors see how the massive gate was reconstructed from fragments. Also notable in this collection is the façade of the throne hall of King Nebuchadnezzar, a reconstructed Neo-Assyrian palace from the 12th century BC, and artifacts from the earliest history of the written word.

Museum of the Ancient Near East

The Museum of Islamic Art was started in 1904 with a donation of precious carpets by Wilhelm von Bode. Such textiles still make up a major part of the exhibition, with colourful examples from Iran, Asia Minor, Egypt and the Caucuses on view. Highlights from the collection of 8th – 19th century Islamic art and craft include the 17th century Aleppo Zimmer, a vividly coloured panelled room from a merchant’s house in the Syrian city of Aleppo that is painted with Arabian and Persian verses and sayings and pictures of people, plants, and mythical beings.

It is impossible to imagine the cultural history of Europe without the carpets and tapestries produced by Islamic cultures. They attest to the continual cultural dialogue between Europe and the Near and Middle East, and form a particular focus in the... more

The Vorderasiatisches Museum was the only branch of the Staatliche Museen zu Berlin that was located exclusively in East Berlin. more

Selected artefacts currently on display in the Museum für Islamische Kunst at the Pergamonmuseum illustrate how various objects have migrated across different continents and how, on closer inspection, shared visual motifs, forms, and craft techniques... more

The Museum of the Ancient Near East ranks alongside the Louvre and the British Museum as one of the world's leading museums of ancient oriental treasures. Shown in an area covering 2,000 square metres the exhibits convey an impression of six thousand... more 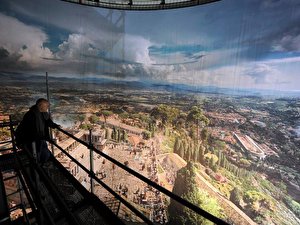 In Yadegar Asisis' new Pergamon panorama, original parts of the Pergamon altar and a video installation can be seen. more

The Berlin WelcomeCard Museum Island offers free admission to the museums on the Berlin Museum Island, discounts at many attractions in Berlin and 72 hours of free travel on public transport. more