The Museum Barberini in Potsdam presents selected paintings by Henri-Edmond Cross, one of the masters of French Neo-Impressionism.

In the "Colour and Light" exhibition visitors can admire the works of one of the most important representatives of Neo-Impressionism: Henri-Edmond Cross. His paintings evolved from quiet works in earthy colours to true explosions of colour when he settled in the small coastal town of Saint-Clair in 1891.

The artist's motifs show the rustic life on the French Riviera in transfigured colours. Cross was not only a mentor for important artists of the 20th century, such as Henri Matisse and Albert Marquet, but also a pioneer of modern painting. The exhibition at the Barberini Museum is dedicated to his oeuvre and explores the anarchist theories and socio-political dimensions behind his romantic paintings. The collection comprises around 100 works from museums and private collections worldwide and includes highlights such as "Calanque des Antibois" and "Plage de la Vignasse".

About the artist Henri-Edmond Cross

Henri-Edmond Cross was born in 1856 as Henri-Edmond Delacroix in Douai, France, and is considered one of the most important representatives of French Neo-Impressionism. His artistic training began with Carolus Duran, followed by lessons at the Écoles Académiques de Dessin et d'Architecture in Lille and with the Paris painters François Bonvin and Émile Dupont-Zipcy. From 1883 he exhibited under the pseudonym Cross to avoid associations with the famous painter Eugène Delacroix.

Museum Barberini on the map 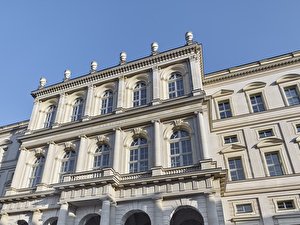 Opened in 2017, Museum Barberini in Potsdam has become an instant success with spectacular temporary exhibitions on major topics, artists and periods of art. more