Since the end of its reconstruction in 2020, the Berlin Palace provides a new space for art, culture and science in Berlin's city center.

Hardly any other building project attracted as much attention as the reconstruction of the Berlin Palace. After six centuries, the site of the Berlin Palace is now home to the Humboldt Forum, a new utilization concept for the old palace.
The Berlin Palace, also called Stadtschloss ("City Palace"), is a very special building and certainly unique in Berlin. While three sides of the building's original palace facade were painstakingly reconstructed, the side facing the Spree River features a more modern design. The interior of the palace, home to the Humboldt Forum, is also entirely modern. Here, various cultural and scientific institutions present themselves to visitors.

Where Berlin's center is today, Elector Frederick II once laid the foundation stone for the palace in the then insignificant twin city of Berlin-Cölln. That was in July 31, 1443. In 1451, the Elector moved into the new residential palace of the Hohenzollerns. From then on, the castle was the permanent seat of the electors, the courts and supreme authorities, protecting them against the resistance of the citizens. In the following years, the palace was repeatedly rebuilt and expanded. Elector Joachim II was the first to largely intervene in the palace architecture: he had large parts of the palace deconstructed and a Renaissance-style building erected instead. The palace was connected to the Berlin Cathedral. Further building measures, such as the construction of the west wing, followed during the reign of Elector Johann Georg.

After the end of the Thirty Years War, Elector Friedrich Wilhelm had the damaged palace rebuilt. Baroque alterations were carried out by the architects Johann Gregor Memhardt and Johann Arnold Nering and a pleasure garden based on the Dutch model was created. When Elector Frederick III was appointed King of Prussia, he had the palace rebuilt by the architect Schlüter into a Baroque palace based on Italian models.

The Palace during the Weimar Republic up to the Demolition

During the Weimar Republic, the Berlin Palace housed the Palace Museum as well as other institutions. However, in 1945, the palace was almost completely destroyed during a bombing raid. The building came to its final end in 1950: on GDR leader Walter Ulbricht's orders, the magnificent building in the center of Berlin was blown up on September 7, 1950 - despite massive protests from the population. The resulting free space, called Marx Engels Square, was only occasionally used for events.

Palace of the Republic

In 1971, Walter Ulbricht's political successor Erich Honecker had the Palace of the Republic (Palast der Republic) built on the empty square. After construction was completed in 1976, the new prestig building of Socialist Germany in the location of the former Berlin Palace was the site of numerous events. However, after the fall of the Berlin Wall, the building was closed due to heavy asbestos contamination. In 2003, after an elaborate asbestos removal process, the German government decided to demolish the building after it had been temporarily used as an event venue - once again despite numerous protests. At the end of 2008, the square on which the Berlin Palace and the Palace of the Republic had once stood was thus empty once again.

Reconstruction of the Berlin Palace as the Humboldt Forum

After a long public discussion, the decision was made to rebuild the former Berlin Palace as the as the Humboldt Forum. The first stone was laid on June 12, 2013. Three of the baroque facades of the old Berlin City Palace were painstakingly rebuilt. On the side facing the river, a new design by architect Franco Stella was implemented. The Humboldt Forum was officially opened in 2020 and houses various museums and spaces for scientific and cultural events. With its historic facade, the new building also restored the image of Berlin's historic center. A controversial of the construction process was the erection of the dome cross: the four-meter-high, 310-kilogram golden cross was not included in the original plans. The former baroque palace did not bear a cross on its dome - but one was added by Frederick William IV in 1854 to show his claim to power to the outside world. The inscription underneath, a biblical quotation demanding submission to Christianity, has also been the subject of criticism.

Since October 2021, visitors of the Humboldt Forum can also visit its rooftop terrace. At a height of around 30 meters, it offers a wonderful view of Berlin's landmarks such as Museum Island, the Brandenburg Gate and the Berlin Cathedral. A visit to the terrace is free of charge and access to it is barrier-free. 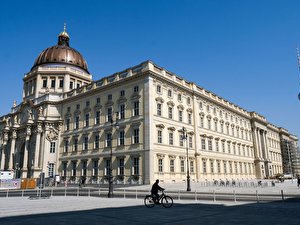 Located in the Berlin Palace, the Humboldt Forum is a modern museum inviting visitors to engage in a dialogue between art and science. more