Potsdamer Platz has been redeveloped as the new centre of Berlin after the fall of the Wall. A bustling traffic intersection in the 1920s, it became desolate after WW II and part of the border strip.

Berlin's Potsdamer Platz is the most striking example of the urban renewal that turned Berlin into the "New Berlin" in the 1990s although it is not, strictly-speaking, a square. The area today consists of the three developments known as Daimler City (1998), the Sony Centre (2000) and the Beisheim Centre (2004), which literally transformed the dormant wasteland where the Berlin Wall stood between east and west Berlin until 1989.

The debate around redeveloping Potsdamer Platz

The challenge of rebuilding the heart of post Cold War Berlin was no trifling matter – how to transform a desolate sandy wasteland into the new German capital's city centre. At stake was nothing less than making a statement on the fundamental principles of urban design at the end of the 20th century. Many issues needed to be addressed. How to reconcile public against commercial interests, the integration of two transport systems, road and infrastructural planning affecting the new re-united centre, limiting traffic in the inner city area and incorporating ecological considerations, deciding on the style of architecture - Manhattan high-rise buildings or lower housing, traditional, futuristic or avant-garde?

The long debates about the future of Potdamer Platz needed to resolve the issue of bringing authentic metropolitan life into an area which had been dead for years – integrating residential accommodation with shopping, leisure and business needs to ensure that the area live around-the-clock.

What can be seen today is believed to have resulted in a successful compromise - a mixture of the American plaza feel at the Sony Centre and a tree-lined European downtown around the Marlene Dietrich Platz producing a lively, buzzing atmosphere.

The Berlinale at Potsdamer Platz

Potsdamer Platz is reached by public transport on the U- and S-Bahn lines, just off the Tiergarten. The new downtown centre is a prime business location which successfully merged state-of-the art architecture and real estate potential for the resurging German Capital. And for a touch of glamour the prestigious Berlin International Film Festival, Berlin's most glamorous calendar event, held in February every year, moved its headquarters here in 2000. The red carpet is rolled out every February for A-list stars outside the Berlinale Palast, where stars, cineastes and public mingle on the new Marlene Dietrich Platz.

Historically, there are three distinctive phases in the history of this legendary square. In the 1920s Potsdamer Platz, where the first set of traffic lights in Europe came into operation, was the metropolis' heart and hub, the busiest European city in its heyday, buzzing with shopping, traffic and entertainment. A heap of ruins after World War II, it lay lifeless as a no man's land – a strip of sandy soil known as the death-strip dividing west and east Berlin until 1989. After the fall of the Wall, in 1989, its resurrection was brought about by consortiums of international investors and the most prestigious international architects available: Renzo Piano, Helmut Jahn, Richard Rogers, Arata Isozachi and Rafael Moneo.

The rebuilding of Potsdamer Platz began in the 1980s when plans were initiated by urban development Senator Volker Hassemer. Investors Daimler-Benz bought a plot of land along the Landwehr Canal to the Wall perimeter at a time when it was still considered a lifeless, peripheral site. Suddenly when the Berlin Wall fell in 1989, the plot became top real estate in the centre of the new German capital. The 1991 Berlin Senate's publicly sponsored "Potsdamer and Leipziger Platz Competition for Urban Design Ideas" initiating a passionate debate where architectural offices from all around the world competed for a piece of the pie in the city of the cranes skyline. It was won by Munich-based Heinz Himmler and Christoph Sattler.

Renzo Piano and Helmut Jahn proposed the winning master plans. Investors Daimler-Benz (today Daimler) and Sony backed the two visions. The Piano/Daimler-Benz project envisioned a more diverse European style area with narrower streets while Helmut Jahn's Sony vision presented the more uniform ultra-modern glass-steel plaza which became the Sony Centre. The vast covered public space with its striking glass roof was the result of a remarkable engineering feat - an outstretched tent roof with material fastened to a steel ring attached to the adjacent buildings. The Panorama Punkt with an observation deck 93 meters high is reached by elevator for the best all-round view of the area in the brown-brick Kollhoff building.

The neo-baroque façade on the Bellevuestrasse is the luxurious Hotel Esplanade, preserved from before WW II. The original Kaisersaal (Imperial room) was literally lifted on raised air cushions and shifted to its present spot. Two walls remain in their original place. Renzo Piano's stone-glass Debis Tower, the Group's headquarters, was the first building completed on the southernmost edge to become the new landmark - a 280-foot-high tower with 22 floors. The Debis building's main characteristic is that each element is separately articulated and the result is a kind of assemblage including stair tower, elevator core and office space.

Main attractions to be seen while walking around the Potsdamer Platz area include: Debis Tower (Renzo Piano) and the Daimler Atrium with its public spaces, including changing art exhibitions, an auto showroom and the artificial water basin, Boulevard of Stars, Sony Center, Cinema Complex and Museum for Film and Television, Arkaden Shopping Mall (Richard Rogers), a 3D IMAX cinema, Musical Theatre and Casino, and Weinhaus Huth wine merchants - the oldest and only surviving original pre World War II building. 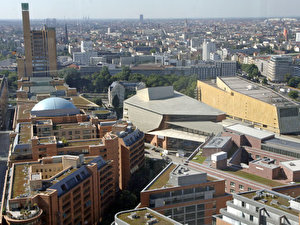 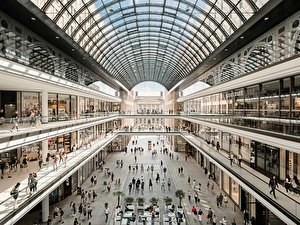