The Berlinale is the city's most glamourous event. With more than 400 films shown it attracts the elite of the film industry as well as the largest audience of any film festival in the world. Berlin is famous for being a cosmopolitan, exciting capital with international appeal. This becomes particularly apparent during the Berlinale, one of the most important events in the international film industry's calendar.

More than 20,000 film professionals and critics as well as numerous film fans from more than 120 countries are accredited for and visit the Berlin International Film Festival each year. With over 330,000 tickets sold, the Berlinale draws the largest audience of any film festival in the world by far.

But the festival has much more to offer than just the screening of films. For two weeks, workshops, panel discussions and joint projects encourage collaboration between all the participants. And at the exclusive Berlinale parties, people, art, glamour and business meet.

The Berlinale's programme includes about 400 films of various genres and formats that are open to the general public, the vast majority of which are world or European premieres.

It is divided into different sections, each with a unique profile: Major international productions in the Competition, independent and art-house productions in Panorama, films for a young audience in the Generation category, the most exciting German cinema productions in Perspektive Deutsches Kino, an in-depth look at films from distant countries and experimental forms in the Forum, and an investigation of various other cinematic possibilities in the Berlinale Shorts.

The programme is topped off by a thematic Retrospective and a Homage that focuses on the life's work of a great film personality. Both these categories, which are curated by the Berlin Film Museum, aim to place contemporary cinema within a historical context.

A Unique Network: The Berlinale and the European Film Market

The European Film Market (EFM), a film trade fair that is part of the Berlinale where 400 companies and 8,000 film professionals foster synergies, has developed into one of the most important events for the international film business. The Berlinale and the EFM, the festival and the market, form a unique network of formal and informal connections - also to the benefit of Berlin as a location for film-making.

Address
Marlene-Dietrich-Platz 1
10785 Berlin
City map
Opening Hours
February 16 - 26, 2023
Internet
Official Berlinale Website (in English)
Miscellaneous
The films are screened in several cinemas in the city centre with the Berlinale Palast at Potsdamer Platz as the central venue. The festival programme and detailed information about advance ticket sales are available at the Berlinale Website. 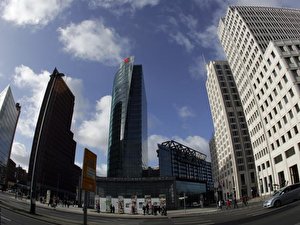 Potsdamer Platz has been redeveloped as the new centre of Berlin after the fall of the Wall. A bustling traffic intersection in the 1920s, it became desolate after WW II and part of the border strip. more