The Dorotheenstadt Cemetery in Berlin-Mitte is Berlin's most famous cemetery. It is the final resting place of many famous artists and personalities and impresses with idyllic greenery and imposing gravestones.

Numerous famous personalities are buried in the Dorotheenstadt Cemetery (Dorotheenstädtischer Friedhof), which was established in 1762 and enlarged several times until 1826. The cemetery features a number of magnificent tombs. The gravestones and memorial plaques read like a Who's Who of Germany's intellectual elite.
Walking through the cemetery, you can see numerous artistic sculptures. The oldest classicist tombstone is from 1807 for the late factory owner Jacob Fröhlich. The bust for the industrialist August Borsig is by Christian Daniel Rauch.

Many famous poets, thinkers and personalities are buried in the Dorotheenstadt Cemetery. Visitors will find the graves of the philosophers Georg Wilhelm Friedrich Hegel and Johann Gottlieb Fichte, the writers Heinrich Mann, Bertolt Brecht, Johannes R. Becher, Arnold Zweig and Anna Seghers, the movie director Heiner Müller, the architects Friedrich August Stüler and Karl Friedrich Schinkel, the artist John Heartfield, the actress Helene Weigel and the printer Ernst Theodor Litfass, among others. Former Federal President Johannes Rau has also had a grave of honour in the cemetery since 2006.

The Dorotheenstadt Cemetery is home to a funeral chapel dating from 1928. After war damage and several redesigns, it was renovated until 2015 and fitted with a light installation by the American artist James Turrell. The light installations can be visited on a guided tour on fixed dates. 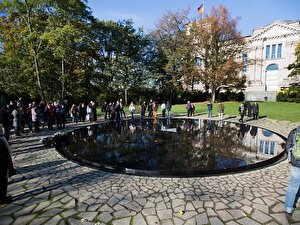 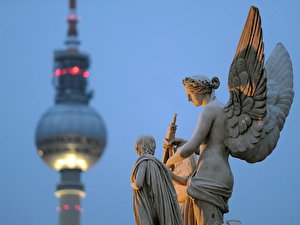 The TV Tower, the Brandenburg Gate, Museum Island and the Reichstag building - no other Berlin district has more sights than Mitte. more