Weather in Berlin in October

Weather in Berlin in October

In October the sun bathes Berlin in a very special light: the average October weather in Berlin.

In October the sunshine hours become less and less and the first leaves rustle on the streets. What still hangs on the trees shines in the most beautiful colours in the sunshine. On average, the sun shines only three and a half hours a day from the sky, but when it shines, it bathes the capital in a very special light. Whether in the Tiergarten, in front of the Reichstag or on the banks of the Spree - a stroll through colourful Berlin leaves a lasting impression. The rain radar usually shows less precipitation in October than in September: it rains seven days a week in the capital and at 29 millimeters, on average no month has less rainfall. With an average daily maximum of about 14 degrees, the gloves can still stay at home. At night the temperatures in October are around six degrees.

The average weather in October 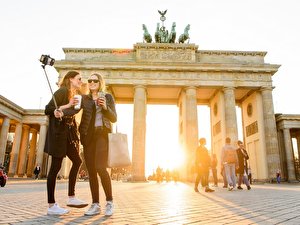 Berlin has its special charms in every season. Plan your visit with our travel weather with the most important dates in a monthly overview. more