Ahead of the Holocaust Remembrance Day, Berlin's Governing Mayor Franziska Giffey has called for a clear stance against anti-Semitism. "Our task is to resolutely oppose those who want to make anti-Semitism and right-wing extremism acceptable, propagate such ideologies or relativize history," the SPD politician said on Wednesday (Jan. 26, 2022). "We will defend our democracy and our open and tolerant society every day anew."

Victims of National Socialism were "people from our midst"

Giffey recalled that the victims of National Socialism were "people from our midst," including Jews, Sinti and Roma, gays, lesbians, religiously and politically persecuted people, and people with disabilities. Since 1996, January 27 has been a day of remembrance for the victims of National Socialism in Germany. It is the anniversary of the liberation of the Nazi death camp Auschwitz in 1945. 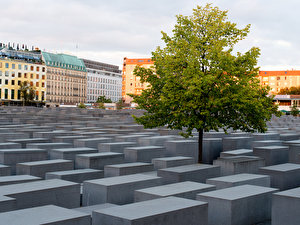 The Memorial to the Murdered Jews of Europe or Holocaust Memorial near Brandenburg Gate commemorates the up to six million Jewish victims of the Nazi Holocaust. more