Jewish Life in Germany: Past and Present

Jewish Life in Germany: Past and Present

The new permanent exhibition in the Libeskind Building of the Jewish Museum Berlin informs about the history of the Jews in Germany from the Middle Ages to the present on 3500 square meters.

On 23 August 2020, after more than two and a half years of renovation, the Jewish Museum Berlin will open its new exhibition entitled: Jewish Life in Germany - Past and Present. The previous permanent exhibition was on display from 2001 to 2017 and, according to the Museum, was visited by over eleven million visitors.

The 1700-year history of the Jews in Germany is not told in a strictly chronological order: The tour of the new exhibition alternates between historical epochs and insights into Jewish themes beyond geographical and temporal boundaries. What is sacred in Judaism? What does the Shabbat mean? What is the sound of Judaism?

Jewish culture and religion in all its facets

Eight thematic modules invite visitors to immerse themselves in Jewish culture and religion with all their senses. Visitors can listen to liturgical chants, Purim rattles and pop music or find out in interviews whether, how and why Jews today follow the commandments. The space-filling work of the artist Anselm Kiefer Shevirat ha-Kelim (breaking of vessels) also offers an interpretation of the creation myths of the Lurian Kabbalah. Five historical chapters form the backbone of the exhibition. They range from the beginnings of Jewish life in Ashkenaz to the emancipation movement in the 19th century and its violent end under National Socialism, and the polyphony of Jewish life today. 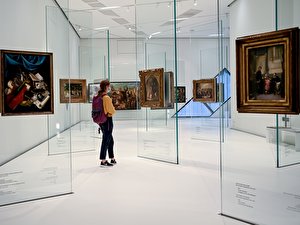 Pictures from the new core exhibition "Jewish life in Germany: Past & Present" in the Liebeskind building of the Jewish Museum in Berlin. more

What: Jewish Life in Germany - Past and Present
Where:Jewisch Museum Berlin
Opening hours: Daily from 10 am to 19 pm
Entry fee: free