The Berggruen Museum is showing a series of fifteen oil paintings by Picasso in response to the famous portrayal of Eugène Delacroix's «The Women of Algiers».

In the winter of 1954-55, Pablo Picasso implemented a long-cherished wish: Picasso, who was 73 at the time, painted a response to the famous portrayal of Eugène Delacroix's «The Women of Algiers», which was created in two versions in memory of a trip to North Africa in 1832. In three months, the Spanish painter created a series of fifteen oil paintings, accompanied by over a hundred drawings and lithographs. However, this series of paintings was only preserved for a short time as a closed ensemble. Today the Museum Berggruen is the only public museum in Europe in which a painting of this series can be seen. In addition to paintings and works on paper from the «Femmes d'Alger» series, the exhibition will also show works that inspired Picasso and works inspired by Picasso. 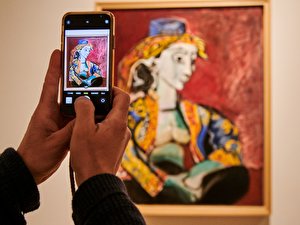 The exhibition "Pablo Picasso & Les Femmes d'Alger" at the Museum Berggruen shows paintings and works on paper from the "Femmes d'Alger" series as well as works that inspired Picasso and those that were in turn inspired by Picasso. more