Popkomm is an international music trade show for professionals. Since 2003 it is set in Berlin, in 2011 as a part of the Berlin Music Week. Currently, its organizers realign the concept of Popkomm. Popkomm is an international music fair and regards itself as the international music business market. Therefore, at Popkomm the whole music industry meets. Since 2003 it takes place in Berlin. Before it was in Cologne. In 2011 it took place during the Berlin Music Week at the former Tempelhof Airport. In 2012 Popkomm was cancelled. It was stated that the branch suffers too much from illegal downloads. Currently, the organizers are working on a realignment of Popkomm.

The trade show concentrates on the markets in Germany, the U.S., Australia and South America. Popkomm is business-oriented. At the new fair grounds at the former Tempelhof Airport the trade show offers a compact and communicative stage for key players of the industry, innovative corporations, live music business and the digital music business.

Originally, Popkomm was divided into three segments called Marketplace, Conference and Showcases. The marketplace targets professionals from the music business, creative business and emerging industries. At the conferences renowned speakers focus on key issues of the sector. During the showcase-section all sorts of live music are presented.

When: Date not announced yet 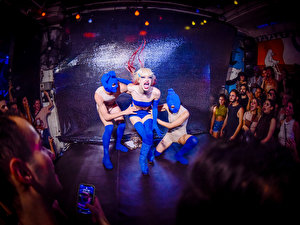 During the three-day festival, musicians, artists and business people turn the Kulturbrauerei into a music hub. more