The square in front of the town hall became a place for rallies and meetings, especially in the 1950s and 1960s, for example after the construction of the Wall and the legendary speech during which the words "Ich bin ein Berliner" (I am a Berliner) were uttered. In addition to annual rallies on 1 May, the protest rally against the Persian Shah on 2 June 1967 also took place in front of Schöneberg Town Hall. The last large gathering of Berliners took place with around 20,000 people on 10 November 1989, the day after the fall of the Wall.

The first forerunner of the Schöneberg town hall was built on Kaiser-Wilhelm-Platz in 1874, which was replaced by a new building in 1891/92. The enormous population growth and the constant expansion of municipal tasks caused the municipal staff requirements to rise steadily. Schöneberg, which had been under municipal law since 1897, had the New Town Hall built on Rudolf-Wilde-Platz (today: John-F.-Kennedy-Platz) according to plans by the architects Jürgensen & Bachmann, where the first town assembly was held on 25 March 1914.

A characteristic feature of the free-standing, four-storey building block is the tower, now 70 m high and slightly protruding from the façade, which houses the "Liberty Bell", modelled on the "Liberty Bell" in Philadelphia and erected in 1950. It was built on the initiative of the former U.S. military governor in Germany, Lucius D. Clay, it had previously travelled through 26 states of the USA, with around 16 million Americans donating for the casting of the bell and signing the Liberty Oath, which, together with the signatures, is still deposited in the City Hall tower today.

Sculptural decorative elements structure the simple plaster façade of the town hall, whose base is made of sandstone. Partially severely damaged during World War II, the tower (by Kurt Dübbers) and the interior (by Rave & Partner) were altered during the post-war years. Largely unchanged to this day is the square façade, divided by an Ionic pilaster order, which is decorated with depictions of various trade and craft activities. On the second floor, to the left is the citizens' hall, to the right the meeting hall of the city or district councillors. The depiction of civic virtues on the risalit on Freiherr-von-Stein-Straße refers to the magistrate's or district council meeting hall behind. Inside, the entrance hall, 63 m wide and covering the entire first floor, is impressive. 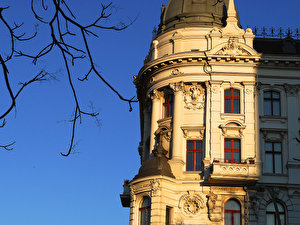 Interesting facts about Berlin-Schöneberg for residents and visitors: explore the different neighborhoods and learn about the history, sights, and famous residents of the district. more