Gardens of the World

Gardens of the World

In the Gardens of the World, visitors can enjoy international gardening culture in nine themed gardens.

The Gardens of the World are part of the 51-acre Marzahn Recreational Park (Erholungspark Marzahn). Beautiful meadows, flower beds and walking paths extend all over the vast park grounds.

When Berlin and Beijing signed the agreement for a city partnership in 1994, this marked the birth of the Chinese Garden in the Gardens of the world. The so-called "Garden of the Recovered Moon" was created according to plans of the Beijing Institute of Classical Garden Architecture. The entire construction was realized by skilled workers from Beijing with imported materials from China. A classical Chinese garden, it is characterised by simplicity and subtle colours - primarily grey, white and red. Its center is a 4,500 square meter lake. The most outstanding building inside the garden is the traditional tea house "Berghaus zum Osmanthussaft", which is connected to other characteristic Chinese buildings by riverside paths and a zigzag bridge.

The Japanese Garden, also named "Garden of Flowing Water", is a project of the Berlin-Tokyo city partnership. The garden designer, professor and Zen priest Shunmyo Masuno took it upon himself in 2001 to create a Japanese garden with traditional style elements. He created a self-contained garden world with a pavilion, a pond, watercourses, a dry garden and impressive stone settings. The Japanese gardne has enchanted visitors since its opening in May 2003. It is intended to be a place of peace, reflection and contemplation in the midst of the busy city. The garden houses typical Japanese plants such as fan maple, Japanese flowering dogwood, Japanese lavender heather and many ornamental cherries.

Protected inside a greenhouse, the Balinese "Garden of the Three Harmonies" consists of a partial replica of a traditional Balinese residential complex and a tropical plant garden. It was opened in December 2003. This garden was also created within the framework of a town partnership arrangement.

The Oriental-Islamic Garden or "Garden of the Four Rivers" showcases the landscaping traditions of various Islamic cultures. A four-meter high wall encloses the area, which is designed as a garden courtyard or riyadh and reminds visitors of an oasis. The garden courtyard is laid out in a geometrical quadrangle according to traditional landscaping models. The pavilion in the centre, whose ceiling is richly decorated with coloured wooden ornaments, houses a fountain, the source of the garden. Here, from the centre of the riyadh, four water pools extend. Fountains ripple in the pools and their walls and covered arcades were decorated with ceramic tiles, so-called "zillij", by Moroccan craftsmen. The entire garden is richly decorated with ornaments.

The Korean "Seoul Garden" is a gift from the city of Seoul to Berlin and is an authentic example of Korean gardening culture. The entire garden was planned in Seoul and built by Korean craftsmen in 2005 who came to Germany especially for this project. The garden is characterized by a varied natural landscape with a pavilion, four consecutive courtyards, and figural decorations. In the designing process, great attention was paid to the special features of traditional Korean garden culture. The garden is divided into three different areas: open spaces or courtyards known as "Ma-Dang", pavilions, and landscape. Pine, bamboo, oak and fan maple are some of the tree species you can find here. The Seoul Garden features four walled courtyards with differently designed gates. At the edge of the highest Ma-Dang there is a large pavilion called "Pavilion by the Water" (Kye Zeong).

In June 2007, the garden maze, modelled after the famous maze in the park of the British Royal Palace Hampton Court, was opened. A floor maze following the pattern of the maze in the Gothic cathedral of Chartres in France was also constructed. The maze consists of more than 1,250 evergreen yews and invites visitors to put their orientation skills to the test following its many paths, crossroads and dead ends, not all of which lead to their destination. A labyrinth, on the other hand, only has one path that leads from the entrance to the center, but it runs in so many twists and turns that you can get dizzy.

The revised and extended Karl Foerster Perennial Garden is an example of German horticultural tradition at the beginning of the 20th century. It was opened on March 9th in 2008 - exactly on the 134th birthday of Karl Foerster. The garden was created in 1987 for the Berlin Garden Show.

The Italian Renaissance Garden, also called "Giardino della Bobolina" was ceremonially opened on May 31st in 2008. Equipped with a loggia, formal flowerbeds and rich sculptural decoration, it represents early European garden design. Clear forms, a limitation of stylistic devices and a manageable size characterize an ideal Renaissance garden. The Italien Renaissance Garden in the Gardens of the World follows these ideals and aims to convey the unique magic of the famous villa gardens of Tuscany.

Derived from the original form of Christian gardens - the monastic cloister - the Gardens of the World also features a "modern" monastery garden. The square garden area consists of a crossroads of light-colored gravel, planting areas of box trees and white flowering perennials, and a water basin as a symbol of water as the source of life. The main attraction of the Christian Garden is the colonnade of gold-colored lacquered and horizontally arranged metal rows. Within these lines are texts from the Old and New Testament as well as from philosophy and culture. This is a reminder that Christianity is a religion of books and scripture.

In October 2021, after two years of construction, the Jewish Garden was opened. Visitors can gain an insight into the diversity of Jewish life and learn more about the history of Judaism and Jewish ways of life on almost 2,000 square metres. The garden completes the horticultural representations of the world religions and is situated on a hill in the visual axis of the Christian Garden. It is laid out as a network of paths, interrupted by planted areas. There are plants here that are anchored in the history of Berlin's Jews. In addition, two pavilions serve as meeting and event points within the Jewish Garden.

Location of the Gardens of the World:

Address
Eisenacher Str. 99
12685 Berlin
City map
Internet
Gärten der Welt
Opening Hours
from 9 AM till nightfall
Ropeway: daily from 10 AM
Admission
Summer (1 March to 31 October): Adults €7, reduced €3, children up to 5 years free
Winter (1 November to 29 February): Adults €4, reduced €2, children up to 5 years free
Accessibility
Two barrier-free entrances: Blumberger Damm (main entrance) and Eisenacher Straße. At the entrance "Eisenacher Straße" wheelchairs can be borrowed free of charge (depending on availability, reservation is recommended). There are several accessible restrooms.
Please Note
Dogs and bicycles are not allowed in the park. 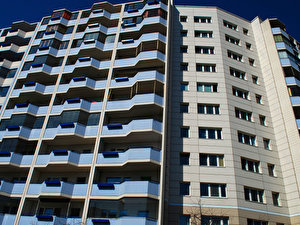 Between concrete high-rise buildings, the Gardens of the World, and old neighborhoods with a rural flair, Berlin-Marzahn is full of surprises. more 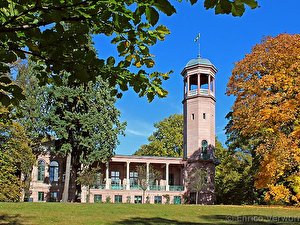 The district of Marzahn-Hellersdorf does not have many sights, but with the Gardens of the World and Biesdorf Palace it has particularly attractive ones. more