The Tierpark Berlin is Berlin's second zoo and Europe's largest landscape animal garden. The zoo is located on the extensive grounds of the Friedrichsfelde Palace Park.

Wild animals from all over the world live in Europe's largest landscape animal garden around Castle Friedrichsfelde. The landscape animal park with its wide enclosures and many animal houses stretches over an area of 160 hectares.

Rredesigned in 2020, the Alfred Brehm House (Rainforest House) is a particular highlight of the Tierpark. Visitors can immerse themselves in the animal kingdom of Southeast Asia with tigers, crocodiles, flying foxes and tree kangaroos. A visit to the walk-through kangaroo enclosure is another must-do for visitors. On hot days, the water playground is fun for younger and older kids. Since the Tierpark stretches out over a considerable area, those tired of walking can ride the electric train through the park for free.

Friedrichsfelde Palace was the starting point from where the Tierpark was built. Thze palace is located directly behind the zoo entrance. It was built in 1695 by the Dutch naval director Benjamin Raulé, probably according to plans by the architect Johann Arnold Nering. After changing hands several times, the palace finally came into the hands of the von Treskow family at the beginning of the 19th century. They ran an estate farm on the property and had a garden laid out by Peter Joseph Lenné in 1821. The historical building survived the Second World War relatively unscathed and has is open to zoo visitors since 1955. 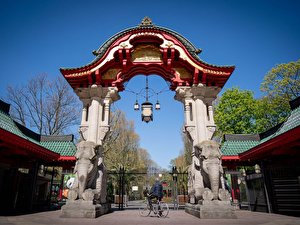 The Berlin Zoological Garden is Germany's oldest zoo and features one of the most comprehensive collections of species in the world. more