While the delicatessen at the gourmet floor of the KaDeWe flatter even the most discerning palates, the large selection of foods, sweets and drinks from all over the world makes everyone else happy, too.

Anyone visiting Berlin should pay a visit to the Kaufhaus des Westens, KaDeWe for short, and especially its Feinschmeckeretage (gourmet floor). The grand department store at Tauentzienstraße is probably the most famous in Berlin, if not in Europe. In addition to clothing and other goods in the luxury segment, the department store is particularly famous for said delicatessen department on the sixth floor. Delicacies from all over the world have been sold here since 1956.

Kobe beef, oysters and macarons at the KaDeWe

On several thousand square meters visitors can get almost anything they want. Whether Kobe beef, oysters or truffle cheese, there is hardly a wish that cannot be fulfilled at the counters. For those with a sweet tooth, the selection also seems limitless: cakes, delicious petit-fours and perfect macarons are just a small selection of the dishes on offer. The KaDeWe is also known for other kinds of delicacies: from wine, champagne, whisky to fine coffee or tea. If you are not sure what to buy, you can confidently rely on the recommendations of the staff. With several hundred types of cheese, for example, the overview is quickly lost.

Restaurants and cafés to spoil the palate

With all the mouth-watering delicacies on offer, it is a good thing that visitors to the sixth floor can indulge their appetite for food in one of the numerous restaurants and cafés on the spot. Whatever the palate desires - oysters, hand-made burgers or fresh sushi, those who get hold of one of the coveted seats can relax and spoil the palate. If you just want to refill your fridge, you can go shopping as usual. Not so cheaply, of course.

Almost more fun than all the food are the people who visit the gourmet floor of the KaDeWe. Tourists and Berliners find themselves in a very special atmosphere: bustling and a bit of Berliner Schnauze (Berlin snout), but friendly. Just typical Berlin. 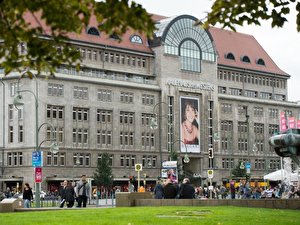 More about the KaDeWe

The KaDeWe is Berlin's largest and most famous department store. Its 60,000 square meters of retail space and gourmet floor attract visitors from all over the world. more 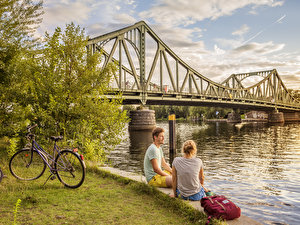 Experience the extraordinary side of Berlin: from sights and history, to hidden oases and a bustling restaurant scene, the capital has a lot to offer. more