When it opens, Berlin Brandenburg Willy Brandt Airport will be comprehensively connected to Berlin's public transport system. A network of bus and train connections with many access points will enable passengers, visitors and employees to travel to and from the airport quickly.

The Berlin Brandenburg International Airport can be reached quickly and easily by regional trains. The airport's train station is located directly below Terminal 1, and the newly established Airport Express (FEX) runs every half hour between the airport and Berlin's main train station. The FEX also stops in Berlin Gesundbrunnen and at Ostkreuz station. In addition, the existing RE7 and RB14 connections continue to operate, so that during the day there is a fast connection between the central station and Ostkreuz and the airport BER four times an hour. Terminal 5 is served by the S-Bahn, which is also a connection between Terminals 1/2 and 5.

When the airport starts operating, numerous bus lines will operate between Berlin Brandenburg Airport and the Berlin urban area. Central bus stops will be set up at Terminals 1/2 and 5, where buses will depart every five minutes.

According to the plans of Deutsche Bahn, only one long-distance connection is currently being served directly at the station of BER Airport: the Intercity from Dresden to Rostock. 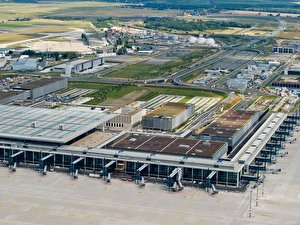