Monbijoupark is a green oasis in the middle of Berlin's city centre. Surrounded by numerous sights, it is a wonderful place to take a break and relax.

Monbijoupark is a green oasis in the middle of Berlin's centre in the Spandauer Vorstadt. Directly opposite the Museum Island on the Spree, Monbijoupark covers an area of approximately four hectares. The park is a perfect place to take a break from exploring the city, as numerous sights such as Museum Island, New Synagogue, Hackescher Höfe are in the immediate vicinity. But also for picnics, sports and leisure time the piece of green offers enough space and inspiration.

The Monbijoupark, translated as "my jewel", was built on the site where the rococo castle "Monbijou" stood in 1959. Where once the Prussian queen lived in her palace with its artistically designed gardens, visitors can now enjoy lush greenery, old trees, an outdoor children's pool, sports facilities and a theatre. The castle was destroyed by bombs during the Second World War. In 1960, the popular green area was created on the same spot. Already at that time the children's outdoor pool was built. In the following years the park was redesigned several times.

A park for all occasions

The last redesign of the green area took place in 2007 and 2007. During these measures, the up to nine metre wide bank promenade was also constructed. The paths were straightened and large lawns were laid out for leisure activities. Besides the large lawns, old trees offer shady places. In the front part of the park, opposite the Bodemuseum, there is an outdoor swimming pool for children, a playground and a fitness area. The Märchenhütte theatre plays fairy tales for children and adults. 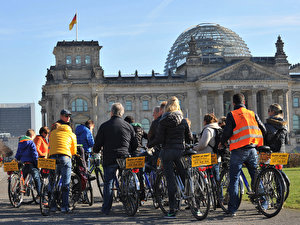 This guided bike tour starts in the Prenzlauer Berg district and includes all the major sights in Berlin's city center and the modern architecture of the government quarter. more