Mauerpark is a public park in the Prenzlauer Berg district. A former part of the Berlin Wall, the park is popular with people of all ages and turns into a flea market and karaoke stage on weekends.

After reunification the former death strip of the Berlin Wall between the districts of Wedding and Prenzlauer Berg became a public park. A 300 metres long strip of the wall still stands upright at the eastern edge of Mauerpark - although the grey concrete walls are now covered with countless works of colourful street art. Today the park consists of a large grass field that was once part of a railway station, and a hilly slope towards the east where it meets the Friedrich-Ludwig-Jahn sports park.

Mauerpark, extending to the north from Eberswalder Straße, is one of a few public parks in Prenzlauer Berg and as a result, a popular place for families, artists and musicians, and for recreation, games and leisure. Especially on summer weekends the former death strip turns into a lively festival ground with live music, karaoke shows and picnics. Every Sunday a large flea market in the southwestern part of the park offers a broad range of lovely odds and ends - from secondhand clothes to Berlin design jewellery and vintage furniture.

Mauerpark on the map: 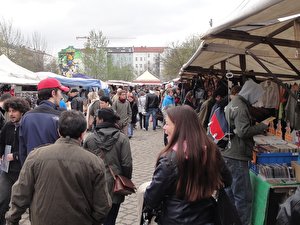 Every Sunday the flea market at Mauerpark in Prenzlauer Berg gets packed with a crowd of tourists and Berliners looking for secondhand clothes, vintage bags and jewellery. more