The Viktoriapark with the Kreuzberg hill is Berlin's highest inner-city elevation and has a real waterfall to offer.

For a good 100 years, the Viktoriapark was the only public park amid a sea of houses in Berlin's Kreuzberg district. Fortunately, this is no longer the case today, but despite numerous alternatives the park still enjoys immense popularity among Berliners. During peak hours, tables and chairs for family picnics occupy the laws, while night in the park's beer garden are as long as ever. In rainy weather, the park becomes a space for romantics.

The year 1888, when Berlin decided to create a park in Kreuzberg, was a fateful year. In March, the liberal-minded Emperor Frederick III. (1831-1888) had ascended the throne. His English wife Victoria, daughter of the legendary Queen Victoria, was a critic of Prussia's military tradition and hegemonic ambitions. After only 99 days of reign, however, the hope for liberalization of the young German Empire was gone: the level-headed monarch died, and under his son and successor, Wilhelm II (1859-1941), the arms race that would eventually lead Europe to disaster began. In memory of the empress from the English royal family, who was granted only a short lifetime, the park project was given the name Viktoriapark.

Even though the park was named after the English-born Empress Victoria, there are no British touches to be found in its design. With its wild waterfall against a rocky mountain backdrop, the Victoriapark has a profoundly romantic character and reflects the typical German tendency to glorify nature in art during the 19th century. The Victoriapark's rocky landscape and waterfall was modeled after after the Zackelfall in the Sudeten Mountains. At various points, you can approach the falling water and indulge in its roar. The wild and romantic spectacle has lost none of its attraction. Visitors who climb up the winding and narrow paths to the top of the Kreuzberg hill are rewarded with an unrivaled view of downtown Berlin.

The National Monument in Victoriapark

At the top of the Kreuzberg hill stands the National Monument, which commemorates the victory of the Alliance against Napoleon in the Wars of Liberation. The spectacular surrounding landscape setting is a perfect match for the monument, which is considered a masterpiece of romantic neo-Gothic architecture. 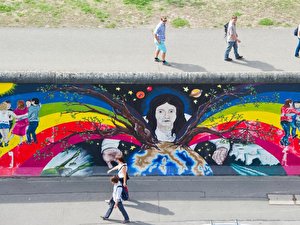 From Checkpoint Charlie and the East Side Gallery to Berlin's trendiest alternative neighborhoods: Discover the most important sights in Berlin's Friedrichshain-Kreuzberg district. more