The Alte Nationalgalerie (Old National Gallery) explores the motif of wandering in painting with the exhibition "Wanderlust. From Caspar David Friedrich to Auguste Renoir". "Wanderer above the Sea of Fog" by Caspar David Friedrich

Starting point is Friedrich's "Wanderer above the Sea of Fog"

Starting from Caspar David Friedrich's masterpiece "Wanderer above the Sea of Fog", a loan from the Hamburger Kunsthalle, this exhibition brings together around 100 works since 1800 that depict walking. It becomes clear that this is a global fascination. The works includes paintings by Caspar David Friedrich, Carl Blechen, Karl Friedrich Schinkel, Johan Christian Dahl, Gustave Courbet, Ferdinand Hodler, and Paul Gauguin.

Alte Nationalgalerie on the map 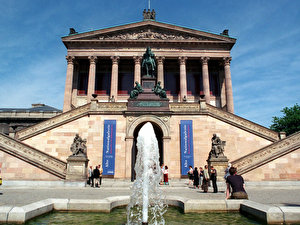 The Alte Nationalgalerie houses one of the most important collections of 19th century painting in Germany and includes masterpieces by Caspar David Friedrich, Adolph Menzel, Edouard Manet, and Claude Monet. more