On Christopher Street Day, hundreds of thousands of people demonstrate for the rights of LGBT people with a great parade, colourful floats, and music. The first Christopher Street Day (CSD) in Berlin was celebrated on the 30th of June 1979. Since then the gay community has extended its political agenda, broadened the definition of diversity and pushed the fight for equality.
Around one million people usually take part in the CSD parade. This year, however, the Christopher Street Day in Berlin is taking place on a smaller scale due to corona. Contrary to tradition, the demonstration will mainly take place as a protest march, while the party dimension will take a back seat. Anyone can take part in the CSD. However, all participants in the demonstration must wear a mask. The organisers also ask that participants leave the procession briefly to eat, drink or smoke, so that the obligation to wear a mask can be observed during the demonstration. 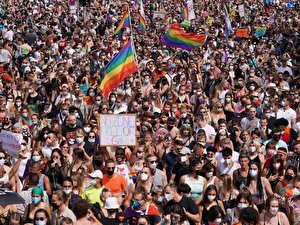 Tens of thousands came to the Berlin CSD on 24 July. The motto of Christopher Street Day 2021 was "Save our Community - save your Pride", an allusion to the fact that many queer institutions fear for their existence because of the Corona crisis. more

This year, the demonstration march will lead from Kreuzberg to Schöneberg. The starting point of the CSD 2021 is on Leipziger Straße between Charlottenstraße and Axel-Springer-Straße. From there the procession will head along Leipziger Straße to Potsdamer Platz and on to the Brandenburg Gate. On the Straße des 17. Juni the procession goes to the Siegessäule and ends at the Urania. It is currently unclear whether a final rally will take place.

History of the Christopher Street Day 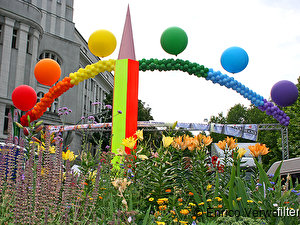 The Lesbian and Gay City Festival in Berlin is Europe's largest street party of its kind. It is held annually around Nollendorfplatz, the traditional gay stomping ground in Berlin-Schöneberg. more