Glienicke Palace is an Italian villa on German soil. Designed by the damous architect Schinkel, the palace is now an impressive open-air museum and a World Heritage Site.

Where Berlin and Potsdam meet and the charming lakescape of the Havel unfolds, the contours of the feudal Glienicke Palace are embedded picturesquely into its surrounding landscape. The longing of the Prussian rulers for Italy at the beginning of the 19th century took shape here. None other than Karl Friedrich Schinkel (1781-1841) built this Mediterranean manor house.

An Italian Villa in Berlin

After half the Prussian royal family had traveled through Italy in 1821-28, the master builder Karl-Friedrich Schinkel fulfilled the desire of the reigning king Frederick William III and his sons Frederick William and Carl for an Italian villa on home soil. Since French architecture was decidedly passé, given the dramatic decade that had passed between Napoleon's conquest and the wars of liberation, who could blame the royals for this euphoric desire to build a Mediterranean villa on Prussian soil?

Prince Carl of Prussia (1801-83) acquired the building land in 1824 from the estate of the late State Chancellor Karl August Prince von Hardenberg who had the estate in Glienicke converted into a country residence in 1814. He had also hired a talented garden designer for the park: Peter Joseph Lenné (1789-1866), who had been responsible for plant care in Potsdam's royal parks. The expansion of Prince Carl's atmospheric estate would continue until his death - for almost sixty years.

Glienicke is more than an ordinary summer residence of a nobleman. The rich furnishings of antique and medieval original pieces as well as contemporary sculptures make the grounds an impressive open-air museum. Before Schinkel transformed the main house into a Mediterranean palazzo, he built the casino on the banks of the Havel River, implementing Italian models with great attention to detail. Two halls on the first floor for summer parties and an apartment on the upper floor for guests are hidden in the small classicist villa. High windows provide a view of the surrounding area, while pergolas on both sides and steps leading to the banks of the Havel connect the building with the park. A porphyry column with the Prussian eagle stands in front of the northern pergola. The shallow bowls on the roof terrace were once used for lighting by fire. On the back wall is an antique bench with Pompeian-style murals. Around the small house are exhibits from the prince's extensive collection of antiquities.

Lion Fountain in the Palace Garden

When you enter the palace park from the Chaussee to Potsdam, the gilded lion fountain will immediately catch your eye. Schinkel designed it based on a model from the Villa Medici in Rome. The fountain is among the most beautiful in Berlin. It features two bronze lions from St. Petersburg, which Prince Carl had received as a gift from his sister Charlotte, who was married to Tsar Nicholas I. Next to the water-spouting predators, a covered semicircular bench invites visitors to rest. The granite bowl in front of it was designed by Johann Gottlieb Cantian, whose huge granite bowl in front of the Altes Museum in Berlin caused a sensation at the time. The fountain was restored in 2010.

Behind the lion fountain rises a two-story building in the classical style of an Italian villa. The manor house, rebuilt by Schinkel in 1825-27, was given a flat roof, a light plaster facade divided by ashlars, and a central risalit. This, in turn, consists of three high french windows with a balcony porch and pilaster articulation on the first floor.

At the back of the horseshoe-shaped house lies the idyllic garden courtyard, which radiates a very Mediterranean atmosphere with its surrounding pergola, the decorative antiques on the walls, fountains and the neighboring cavalier wing with tower. The walled antique spolia in the courtyard facades were acquired by Prince Carl and Schinkel in Italy. The eye-catcher in the garden is a copy of an antique fountain with a stone tub from 1828. Behind the cavalier wing is the former carriage house, which today houses a restaurant. In front of it stands the Neptune Fountain, made of a cast-iron figure and a marble bowl.

Schinkel designed the interiors of the palace in a classicist simplicity and distinguished them with bold colors. In addition to the Red Hall and the Green Salon, there is also a turquoise bedroom, a deep blue library, and a marble room. As usual, the multi-talented architect designed almost all of the palace interior, of which only remnants still exist today. When the palace was converted into a sportsmen's home in 1950-52, Schinkel's interior design was removed. After this use ended in 1987, the rooms were reconstructed in the historical style. Today, the Green Salon contains a chaise longue of the prince and princess, which Schinkel had designed for their palace in Berlin in 1828.

The Berlin Palace Administration was able to reacquire former artworks from Prince Carl's estate from the foundation of Baron Cerrini di Montevarchi. Since 1995, the Palace Museum has thus been presenting an impressive exhibition about aristocratic living culture from the first half of the 19th century. Another exhibition centers around the Prussian court gardeners, who created and tended to the landscape around Potsdam since the 18th century.

One building that departs from the serene atmosphere of the estate is the small monastery courtyard located between the palace and the casino. Ferdinand von Arnim built the sacral-looking ensemble of forecourt, courtyard and cloister in 1850 using components from a demolished medieval monastery near Venice. The apse contains the sarcophagus of the Italian philosopher Pietro d'Abano (1250-1315). The small courtyard features a Byzantine fountain that probably dates from the 11th century. The courtyard is said to have been the prince's favorite place for breakfast. The Monastery Courtyard is the place where you can leave the narrower palace garden area and enter the more extensive, partly forest-like landscape park.

Rotunda at the Glienicke Bridge

Another highlight of the architectural design of the palaca gardens is the rotunda at the Glienicke Bridge, also called the Great Curiosity. It was placed in 1835 as a vantage point next to the then newly built stone bridge. On top of the rotunda, which consists of 16 Corinthian columns, Schinkel placed a copy of the Lysicrates monument dating from 334 BC. Between the columns there are gilded grilles with the heads of Zeus and Hera. The face of Hera is said to have the features of the wife of Prince Carl, Princess Marie of the House of Saxe-Weimar (1808-77), who was known for her beauty.

From Decay to World Heritage

The main access to the palace grounds is through the St. John's portal on Königstraße, so called because of the crosses of the Order of St. John that decorate the gate. They commemorate the Lord Master of the Order awarded to the lord of the manor in 1854. The neo-Baroque iron grille bears the initials of Prince Carl. Two gilded griffins by the sculptor August Kiß guard the entrance. After the death of Prince Carl in 1883, the grounds were neglected and fell into disrepair. The city of Berlin acquired the Glienicke grounds in 1935 and opened the park to the public. Since 1990, the harmonious synthesis of architecture and garden design has been a UNESCO World Heritage Site as part of the Berlin-Potsdam cultural landscape.

Address
Königsstr. 36
14109 Berlin
City map
Opening Hours
November-March: Saturday & Sunday from 10 AM til 4 PM April-October: Tuesday to Sunday from 10 AM till 5.30 PM
Please Note
Visit are only possible with a guide.
Accessibility
The exhibition rooms are not accessible for wheelchair users.
Website
www.spsg.de/en 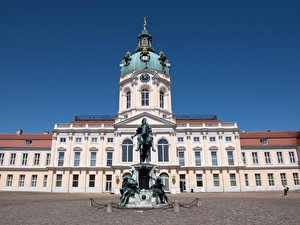 As the former Prussian capital and royal residential city, Berlin has a noble past that numerous castles still tell of today. more