The Victory Column with Victoria, the Goddess of Victory in the centre of the Tiergarten is one of Berlin's most famous landmarks and a popular tourist spot.

Even from afar, the winged sculpture on the Victory Column in the west of the city shines brightly. The monument that was originally erected to commemorate Germany's victories against other nations has long ago taken on a different meaning in the public imagination. Today, the Victory Column is closely linked to the techno festival Love Parade - every year, the closing rally took place at the feet of the famous monument. On top of the 69-meter-high column, a lookout point offers a great view over the Tiergarten and the nearby Bellevue Palace.

History of the Victory Column

The Victory Column was designed by Johann Heinrich Strack. Construction began in 1865 and took eight years. The winged sculpture of Goddess Victoria on top was designed by Friedrich Drake. The monument is meant to commemorate Germany's victories against Denmark, Austria and France between 1864 and 1871, a fact that is indicated by the sculpture's victorious pose as well as the gilded gun barrels on the columns and the mosaic by Anton von Werner in the colonnade.

Along with the TV Tower and the Brandenburg Gate, the Victory Column has long been one of Berlin's most famous landmarks. However, hardly any Berliners still know the original symbolism behind the monument. These days, most people associate the Victory Column with the raves and parties of the Love Parade festival. The column is also known as a lookout point. Its viewing platform is located directly under the golden sculpture of Victoria. After climbing the 285 steps to the top, visitors are rewarded with a great view over the Tiergarten and the nearby Bellevue Palace.

Address
Großer Stern 1
10557 Berlin
City map
Opening Hours
April to Oktober: Mon-Fri 9.30 AM till 6.30 PM, Sat & Sun till 7 PM
November to March: Mon-Sun 9.30 AM till 5.30 PM
closed on December 24
Accessibility
The ascent to the lookout point is not wheelchair accessible and not suitable for people with limited mobility or weak constitution.
Admission Fee
Adults € 3.50, reduced fee € 3 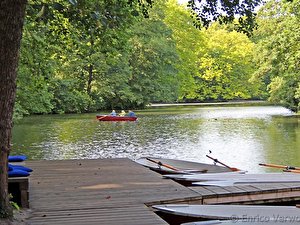 Popular among locals and visitors alike, the Tiergarten is Berlin's largest and most frequented inner-city park. It is ideal for a stroll, outdoor activities or a picnic. more 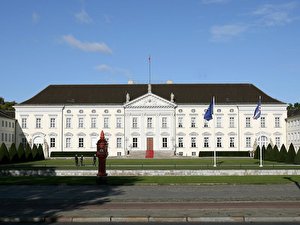 Bellevue Palace on the banks of the Spree in Berlin-Tiergarten is the official residence of the Federal President of Germany. more